(Portland, OR) – Hopworks Urban Brewery (HUB) today announced the February release of its award-winning seasonal beer Rise Up Red India Red Ale. This classic Northwest-Style Red is available in four-packs of 16oz. cans, 22oz. bottles and on draught throughout HUB’s distribution area, and on tap at both Hopworks brewpubs. 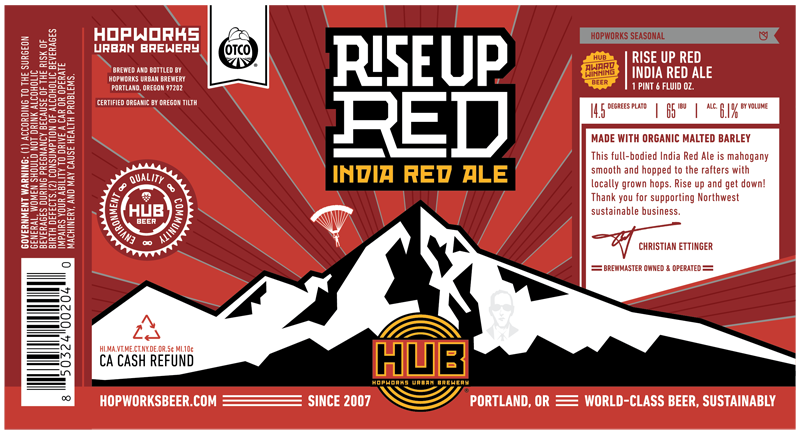 Rise Up is deep mahogany in color, full-bodied, and balanced with a blend of organic caramel malts and a touch of organic chocolate malt. Hopped to the rafters with locally grown hops that showcase citrus and resinous flavors, the beer is also dry-hopped for an extra blast of hop aroma. The beer checks in at 65 IBUs and 6.1% ABV.

Rise Up Red won a gold medal at the 2009 Great American Beer Festival. It is one of the first beers brewed at Hopworks and its release is highly anticipated at Hopworks’ brewpubs each year.

Rise Up Red is part of the Hopworks NW Legends Series, which highlights local histories and folklore through the release of seasonal beers. The label artwork prominently features Mt. Hood, Portland’s neighboring mountain, along with the hidden image of a true NW legend. Rise Up Red replaces Organic Abominable Winter Ale in the seasonal rotation and is followed by Pig War White IPA.

Hopworks Urban Brewery strives to revolutionize and inspire the brewing industry with practices that drive quality, protect the environment and improve the community we live in. Utilizing organic malts and a combination of locally-sourced, organic and Salmon Safe hops, the company’s 20-barrel brewery produces 16,000 barrels of beer a year for HUB’s two brewpubs and for distribution throughout the Northwest. Hopworks is a family-owned and operated business, the first Certified B Corporation brewery in the Pacific Northwest, a gold-level bike friendly business, and is recognized as one of Oregon’s Best Green Companies. Visit Hopworks online at HopworksBeer.com and follow us on Twitter, Facebook, and Instagram.