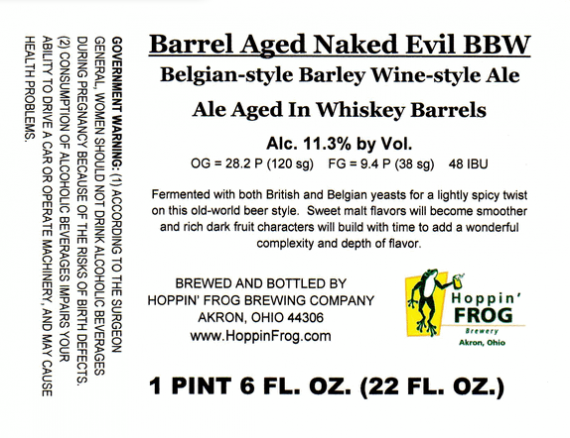 We originally released Barrel Aged Naked Evil to celebrate Hoppin’ Frog’s 5-year anniversary, in September 2011.   A month later, it won a bronze medal at the Great American Beer Festival, beating 115 entries!   And partially because of the flavor and aroma created by these rare, super-special barrels, our brewers think this is the best one we’ve brewed.   So this is one heck of a great tasting beer!!   Price was $18.99/bottle back in 2011 when it was first released, and has not gone up for this batch.

It is appropriately called Barrel-Aged Naked Evil, because it harkens back to the roots of brewing, with Belgian fermentation and barrel aging.   It is quite an evil concoction of savory flavors, and substantial alcohol, that is hard to resist!   Barrel-Aged Naked Evil is a flavorful Belgian Barley Wine aged for an extended period in oak barrels, allowing for concentration of the beer, while water slowly evaporates and adds a mellowing vanilla note from the oak.

What results is a unique combination of rich, smooth vanilla flavors, which strike a wonderful balance to the spicy Belgian character.  This combination of spicy and savory flavors isn’t often tasted together in a beer, and gives Barrel-Aged Naked Evil the WOW factor that a 5-year anniversary beer from Hoppin’ Frog should deliver.   Available once again now in 2014 in very limited quantities, this beer will be a super one to drink right now, as well as put-up for aging in your cellar.