Hess Brewing – An Introduction to a New Nano-Brewery 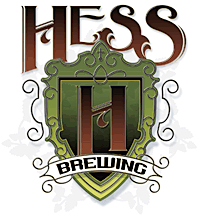 TheFullPint likes to cover craft breweries large, small and in between. We are even supporters of homebrewing.

Our friends at Hess Brewing have started what is known as a Nano-Brewery in San Diego, and we’d like to introduce you to them. Read on for the introduction from Proprietor Mike Hess.

Hess Brewing opened up back in July 2010 as San Diego’s first and only producing commercial nano-brewery. Nano in this case we define as:
1) brewing on less than a 3bbl system (ours is 1.6bbls ~ 51 gallons per batPch)
2) not the full time job of the owner/brewer (in my “real” job, I run a financial services practice)

However small our system is, we make great and big beers, including Claritas Kolsch (5.8%), Grazias Vienna Cream Ale (6.3%), Intrepidus IPA (8.5%), Amplus Acerba San Diego Pale (11.3%) and Ex Umbris Rye Imperial Stout (9.8%). We have also put up four specialty beers, a Cascadian Dark, Sticke Alt, Honey Orange Wheat and a Barleywine. We host a party at the brewery about once every month or so (we had over 350 show up for OktoberHess) and starting this month and on subsequent third Friday’s we’ll start FAC (Friday Afternoon Club) with drink specials, music and a food truck.

I have been brewing for 15 years and found myself in the right space and the right time to open Hess. We are tucked away in a non-descript industrial park, about 150 yards west of Alesmith. Our entire operation, brewery and tasting room is in 1100 square feet (which includes 300 ft2 of office). Even though we’ve only been open for 7 months, we’ve gotten a lot of great press, and even some awards. Over the course of a month long online poll run by Taphunter.com, we were voted San Diego’s 2nd Favorite Brewery, losing to Alesmith but beating out all the rest. Pretty crazy and quite an honor for sure.

We have a Facebook page, www.facebook.com/hessbrewing, website (www.hessbrewing.com) and a blog (it all started with the blog) www.hessbrewing.blogspot.com.  On our blog we have detailed the process undertaken to get the brewery off the ground and even the Brewer’s Association refers inquiries from would-be-nanobrewers to our blog as a resource. I’ve also been asked to speak on a panel at the AHA Conference on the subject, which I am stoked to do!