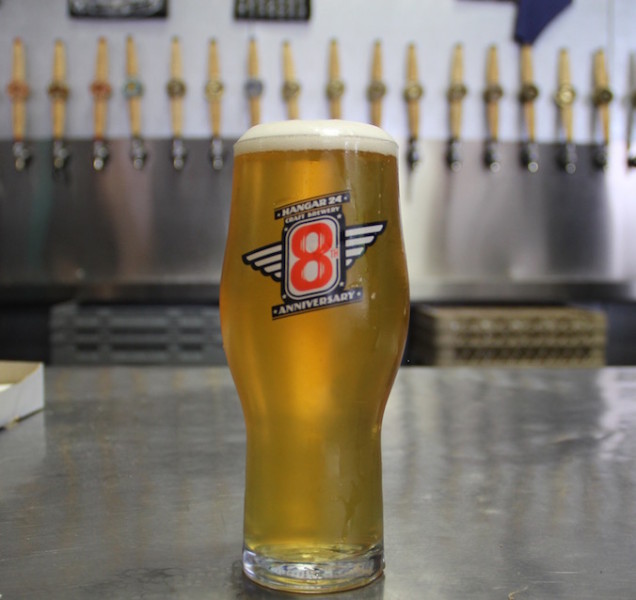 The beer is an American IPA brewed entirely with the popular Citra hop. Unlike many IPAs, which use a blend of different hops, Hangar 24’s 8th Anniversary IPA uses 100% Citra for bittering, flavoring, and aroma. The beer was massively dry-hopped for an even fresher Citra hop aroma. Citra- hopped beers are known for having fresh aromas of citrus and tropical fruit.

“Citra hops are legendary to the industry and an IPA brewed with 100% Citra is something every hop-head should try,” said Hangar 24 owner Ben Cook. “However, the actual purpose behind our single-hop Citra IPA, was the fact that it’s a friendlier beer that even those new to IPAs can enjoy.”

The beer will debut at AirFest and the Tasting Room this Saturday.

On top of their 8th Anniversary Single Hop Citra IPA, Hangar 24 will roll out dozens of limited edition beers from their archives for AirFest attendees to sample throughout the day in a “Special Release” zone. This is in addition to the brewery’s regular craft beer releases, such as Orange Wheat, Betty IPA and Iconic Double IPA, which will also be available all day.

AirFest runs from noon to 10 p.m. this Saturday, and will feature an airshow with headliners the Patriots Jets Team, a 3 band concert, more than 60 vendors, a massive Kids’ Zone, and plenty of Hangar 24 craft beers.

Tickets are on sale now at www.hangar24airfest.com