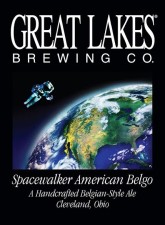 Spacewalker American Belgo is named for the surprising number of astronauts who have called Ohio home. Brewed with Belgian yeast and American hops, including the experimental ADHA 881 hop, Spacewalker is bold yet balanced with spicy, fruity flavors.

Spacewalker will be released this June in 4-Packs and Draft in GLBC’s distribution markets, taking the place of last year’s commemorative Silver & Gold IPL, which was brewed for GLBC’s 25th anniversary.

Name Origin: Perhaps one of space’s great mysteries is why so many of its explorers hail from Ohio. In honor of the 25 courageous astronauts who have called Ohio their terrestrial home, and the nine Ohio men and women who’ve logged hours walking in space, we present this adventurous brew. Our American Belgo is a trans-continental journey combining bold American hops, candy-sweet Belgian yeast, and a complex blend of malts to boldly go where few beers have gone before.

Great Lakes Brewing Company®, which is comprised of a Brewery and Brewpub, was founded in 1988 by brothers Patrick and Daniel Conway as the first microbrewery in the state of Ohio and today remains Ohio’s most celebrated and award-winning brewer of lagers and ales.