(Denver, CO) – This October, a new Yeti is born. We’re happy to introduce the newest Yeti clan member, Chai Yeti. With this Himalayan-inspired variation, we are bringing Yeti back to its roots. 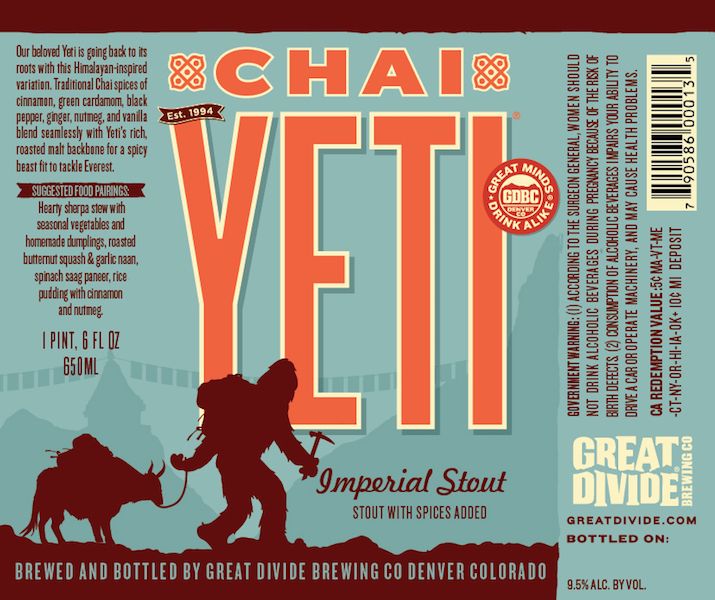 Our beloved Yeti is going back to its roots with this Himalayan-inspired variation. Traditional Chai spices of cinnamon, green cardamom, black pepper, ginger, nutmeg, and vanilla blend seamlessly with Yeti’s rich, roasted malt backbone for a spicy beast fit to tackle Everest. 9.5% ABV.

This new variation is a nod to the Yeti’s home region of the Himalayas. Creating a Yeti variation that uses traditional chai spices seemed like a natural fit. The chai flavor profile matches perfectly with the chocolate and roasty malt character of Yeti. Similarly, both the mythology surrounding the Yeti and the chai spice flavor originated in the same region. One sip of Chai Yeti will transport you straight to the Himalayas.

ORIGINS OF THE YETI

The Yeti figure has its origins in Himalayan folklore. The character is an ancient and important part of the legends and history of the Sherpa, the communities that live in the mountains of eastern Nepal. In 1921 the explorer and politician Charles Howard-Bury led a British expedition to Mount Everest. He spotted some large footprints and was told that they belonged to “metoh-kangmi”. Which roughly translates to “man-bear snow-man”. In that moment, a legend was born. Accounts of sightings by locals continued to be translated by Western visitors. As a result, the story of a mysterious ape-like snow-man took off. By the 1950s, interest ran high. Various mountaineers launched expeditions to find the creature throughout the Himalayan region. And while belief in the mythical beast may have dwindled throughout the years, the legend of the Yeti lives on today.

WHERE CAN I DRINK IT?

Chai Yeti is available from October through December in 22 oz bottles across the country. It is on tap in both Great Divide Denver taprooms starting Monday, October 2nd. Chai Yeti will be pouring during the Great American Beer Festival as well. This new Yeti variation will also be available just in time for National Yeti Awareness Week November 13th -17th.