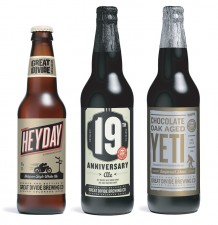 Great Divide’s new 6-pack seasonal, Heyday, is an exceptionally pleasant Belgian-Style White Ale. Brewed with barley, oats and raw wheat, Heyday is uniquely flavorful for such an easy-drinking ale. With a slightly cloudy appearance, mild hop bitterness, and a nuanced body, Heyday is a balanced, agreeable offering. At 5.2% ABV, Heyday will be available in 6-packs and 5 and 15-gallon kegs, making it a perfect complement to the brewery’s portfolio.

To celebrate the brewery’s 19th Anniversary, Great Divide’s brewers deviated from previous years’ anniversary ales and developed an entirely new recipe. The label reads, “19th Anniversary Ale isn’t just a wood-aged ale. It’s a compass – a reminder of where we’ve been and where we’re going. Brewed with pure birch syrup and aged on birch wood, this beer embraces reverential tradition and revolutionary innovation. As we celebrate our 19th year, we hope you’ll join us for the road ahead.” At 10.2% ABV, 19th Anniversary Ale is available in 22oz. bombers and 5-gallon kegs.

Returning this year is Chocolate Oak Aged Yeti Imperial Stout – another revered incarnation of Great Divide’s legendary Yeti Imperial Stout. A slightly toned-down hop addition allows cocoa nibs to contribute some pleasing bitterness, while vanilla notes from the oak combine with the cocoa to create an aroma and flavor akin to a gourmet chocolate bar. A dash of cayenne keeps things lively, adding just a bit of heat to the finish. At 9.5% ABV, it will be available in 22oz. bombers and 5-gallon kegs. Chocolate Oak Aged Yeti boasts a perfect RateBeer.com score of 100.

Additionally, all three of these seasonal beers will be available for purchase in their natural habitat – the Great Divide Brewing Company Tap Room – for on-site tasting and 64-ounce growlers to go.

Great Divide brews some of the globe’s most balanced yet assertive and flavorful beers. These beers have landed an impressive amount of acclaim, earning 17 Great American Beer Festival medals and 5 World Beer Cup awards. Named “Top Brewer In Colorado” by Ratebeer.com (2013), 12th on their list of “Best Brewers In The World” (2013) and 7th on BeerAdvocate’s “All-Time Top Breweries On Planet Earth” (2010), Great Divide is one of America’s most decorated breweries. But why take their word for it? Crack open a bottle and decide for yourself.