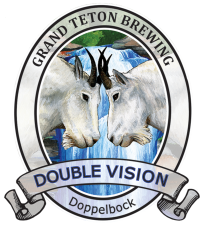 The story behind the dopplebock style starts in the 17th century where Paulist monks of Munich were allowed no solid food during their bi-annual fasts. They brewed an especially nourishing strong dark lager they called “liquid bread” and named “Holy Father” to help them through the Lenten and Advent fasts. The beer was known as a doppelbock, which signifies a strong lager. Since “bock” also means “billy goat” in German, these beers are often decorated with images of gallivanting goats. Our Double Vision label features two goats in front of a waterfall—a reminder of the importance of water in the development of the style as well as the taste of this strong lager.

Double Vision’s slightly burnt caramel flavor and malt sweetness make it an incredible match for game—venison, moose, duck, goose, and wild boar—especially when prepared with fruity sauces or reductions. Try it with pork and sautéed apples, roasted root vegetables, sweet sausages, ham or prosciutto. It’s wonderful with cheese and dessert; pair it with an aged Gruyère, a caramel flan, or a crème brulee.