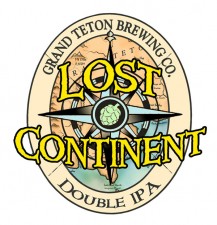 Grand Teton Brewing Company will begin shipping Lost Continent Double IPA mid-April as the first of their two seasonal beers. Lost Continent will be available from May through the end of September.

From October 1st through the end of March, Grand Teton Brewing will be offering Black Cauldron Imperial Stout. Both brews will be available in uniquely designed 4-packs (12oz bottles) and in ½-Bbl kegs.

Lost Continent Double IPA has an astonishing three pounds of hops per barrel in the kettle and another pound per barrel of “dry-hops” added after fermentation, bringing this beer to 90+ IBUs. Starting with an original gravity of 22˚ Plato (1.088 SG), this is a full-bodied beer weighing in at 8.0% ABV. The hops provide citrusy, resinous spiciness, making this beer a great match for any bold food. Try it with prime rib, Cajun blackened pork or chicken, Thai, Indian or Vietnamese cuisine.

Grand Teton Brewing updated the name and image of their Double IPA to reflect the history of IPAs. The image on the bottle and 4-pack depicts an old nautical map, compass rose and fictitious “Lost Continent”. (Feel free to browse the map of the Lost Continent on the website www.grandtetonbrewing.com.) The bottle’s label is adorned with metallic gold trim and its top is wrapped with gold foil.

India Pale Ales were originally brewed to quench the thirst of the British who occupied India in the 1700s. The higher gravity, heavily hopped ales could survive the long, arduous voyage (across the equator twice) through tropical waters where lighter, sweeter ales would spoil and sour. These IPAs soon became the choice beer for adventurers who had the curiosity to see what was over the horizon. As explorers raced to discover uncharted corners of the globe, many considered it necessary to bring IPAs with them.

We encourage you to keep exploring and looking for your own Lost Continent. As you venture out into the unknown, make sure to pack a beer that will survive the journey.

Both the Lost Continent and Black Cauldron beers were born from the renowned Cellar Reserve Program. Over the last 6 years, these have been the most popular of the Cellar Reserves, with numerous requests from bars, retail stores and fans. Both beers are high gravity and bottle and keg-conditioned. Conditioning creates a smooth, creamy head, fine layer of yeast at the bottom and exceptionally long shelf life. For simplicity of shelf placing and register sales, both 4-packs will have the same UPC.

Be on the lookout for Black Cauldron Imperial Stout coming this October. For information on either brew or the seasonal program, call the brewery at 1-888-899-1656 or contact your local Grand Teton Brewing distributor.