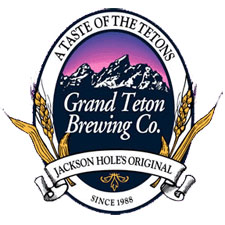 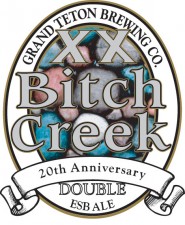 To commemorate that twenty-year history, Grand Teton’s brewers have chosen four of their year-round beers—three current, one historical—to strengthen and enhance. XX Bitch Creek Double ESB is the final release in their 2008 XX series.

Bitch Creek ESB, first brewed in 2003, perfectly balances big malt sweetness and robust hop flavor for a full-bodied mahogany ale. It has quickly become their best-selling beer, as well as their most-critically acclaimed, having won medals–including two golds— at three out the past four Great American Beer Festivals.

XX Bitch Creek Double ESB is all that and more. Grand Teton took the Bitch Creek recipe and doubled everything: double the malt, double the hops, twice the flavor. This is a huge beer at 7.5% alcohol by volume, which should be paired with only the most flavorful of foods. Try it with the best steaks, game meats and hearty stews, or with a nice cave-aged Gouda.

The Cellar Reserve series of beers are unique beers, different even from other craft beers. Grand Teton’s Cellar Reserves are brewed with specialty grains and more unusual ingredients than most micro brewed beers. Most ales and lagers are produced in 2-4 weeks. However, 3 to 8 months are spent on each of the Cellar Reserve specialty brews. They are also bottle and cask conditioned, which produces natural carbonation and will blend and smooth the flavors with age. These beers have a long shelf life and don’t have to be rapidly consumed. Proper aging of these bottles creates beers to be cherished.

Grand Teton Brewing releases four or five different beers a year in the Cellar Reserve line. The production quantity is very limited. The XX Bitch Creek Double ESB is available in kegs and unique brown one-liter bottles, with captivating silver and gold labels. Each bottle has a flip-top and wire bale lid that has been sealed in colored wax.