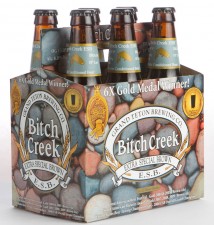 The United States Beer Tasting Championships honored Bitch Creek ESB as their National Grand Champion in the Brown Ale Category during their 2011/2012 winter competition. This is the 10th time Bitch Creek ESB has stood atop the podium in 8 years. The USTBC also recognized Grand Teton Brewing Company by announcing Bitch Creek ESB and their Coming Home 2011 Holiday Ale as the Best of the Pacific Northwest. The field consisted of a total of 435 beers from 134 breweries. The USTBC winter competition examined beers across 13 different categories.

The USBTC takes a unique approach in that its competition is held in multiple stages. Sequential field trials are conducted wherein judges evaluate beers and select the best to advance to subsequent rounds. This allows beers to be judged in relatively small flights while ensuring that the best beers are still determined through head-to-head competition. All beers were tasted in blinded fashion and judged on a hedonic scale. Unlike most national competitions, breweries are not charged monetary fees for participating in the competition allowing everyone to participate.

In 2011, Bitch Creek ESB won gold medals in the US Open Beer Championships, the Los Angeles International Commercial Beer Competition and the North American Brewers Awards. Previous gold medal wins include the North American Brewers Awards (2007, 2008, 2009), the Great American Beer Festival (2004 & 2005) and the United States Beer Tasting Championships (2008). In addition, many more silver and bronze medals have been awarded over the years. Bitch Creek ESB has proven itself a solid competitor, consistently winning at the highest level of competition.