Against The Grain Is Expanding With A New Brewery 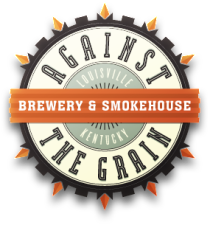 Louisville, KY – Against The Grain Brewery, Louisville’s first brewer owned & operated brewery, will increase production by over 400% in 2015, with the expansion of a new production/packaging facility, also located in Louisville, KY.

The expansion includes the acquisition of the old ‘Fischer SIPS’ building located at 1800 Northwestern Parkway in the Shippingport/Portland neighborhood of Louisville. At 25000 square feet, “the space is perfect for the current and future foreseeable expansion plans of AtG”. The addition of this brewing facility will include; a new 3-vessel x 30 barrel brewhouse manufactured by W.M. Sprinkman, and an unspecified number of 30 & 60 barrel fermenters/brite beer tanks, allowing for an initial annual production of 6500 barrels of beer per year. “We have chosen to work with Sprinkman as we share core values relating to a commitment to quality and the fact that all of the materials and fabrication will be done in the USA. As much as we are committed to Louisville and supporting the quality of our local economy, we must also carry this commitment when choosing our global suppliers.” Additional equipment acquisition includes, a centrifuge and packaging lines for kegging, as well as bottling & canning AtG brands.

In addition to an upgrade of brewing operations, we will create an additional space to increase the capacity of our barrel aging program. “The additional space will allow us to increase our barrel aging program capacity by 10 times! So you will see more production of barrel aged favorites like Kentucky Ryed Chiquen, Bo & Luke Imperial Stout, and Mac Fanny Baw Salted Rauchbier”. Initially the expansion will focus on production, however we will also develop an area to include a tasting room and retail space.

It should come as no surprise that AtG must expand. Current distribution allows for access to wholesale in 38 contiguous states nationally, as well as a number of countries in western Europe. “Currently the demand for our beer is exceeding our ability to produce at the Slugger location, so we feel like the time is right and the location is ideal for an additional brewery.” AtG’s current location at Slugger Field (401 East Main St.) is producing around 1500 barrels annually, primarily servicing the pub located in the stadium. The new facility will increase production to service draft & bottle sales in Louisville and the entire state by 150%, as well as increasing national and global sales by 250%. “We are excited at the opportunity to service our existing customer base more consistently, as well as establishing AtG nationally, with the potential additions of more global markets in the future.”

Against The Grain Brewery and Smokehouse was established by brewers Sam J Cruz, Jerry Gnagy, Adam Watson and restaurateur Andrew Ott, in Sept. of 2011. AtG, located at Slugger Field, is Louisville’s premier craft brewery, boasting production of a countless number of innovative and unique brews, as well as a an array of amazing smoked meats, all served at the adjoined restaurant/ pub. This marks the second expansion for the brewery, the first was unannounced and included the annexation of the old Park Place restaurant at Slugger Field for the installation of more product tanks and the addition of capacity through contract production at Pub Dog Brewery in Westminster, MD.