Against the Grain Brewery Goes Euro

(Louisville, KY and Hagen, Germany ) – After five years of brewing in America and distributing our beers all over the world, we’ve decided to take our unabashed, crude humor and brew it in a new land. Against the Grain Europe is our latest project made in Europe for Europe. According to our Brewmaster and Managing Member, Jerry Gnagy, “I’ve had the pale ales and IPAs we send to Europe and as fresh as we can send it and as fast as we can move it, it still isn’t fresh enough.” 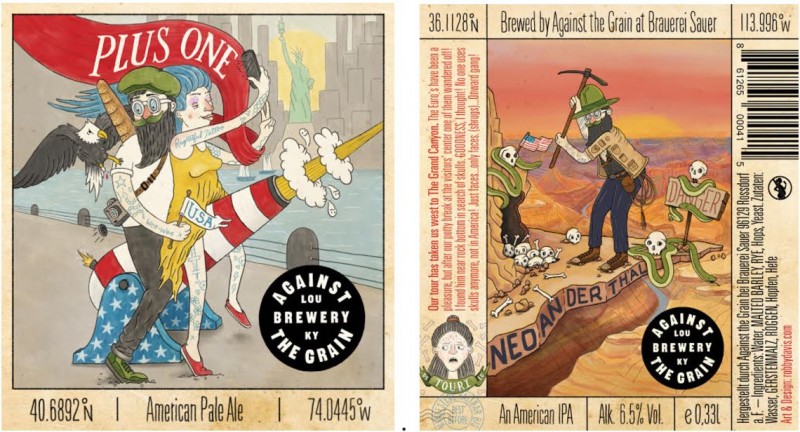 Against the Grain Europe is an extension of who we are in Louisville, but with production in Germany at Vormann Braueri in Hagen, just outside of Düsseldorf. Against the Grain Europe exemplifies our American styles and quality standards. “AtG Europe is about brewing hop forward beers closer to the consumer to make them fresher and cheaper. Both good things,” says Jerry, “The two brands we are starting out with are clones of A Beer and Pile of Face, two brands that rely on hop character and freshness, also oddly enough both have large charges of German Hops in them (Mandrina Bavaria, Herkules and Hallertau Blanc) so there is a tie to Germany there as well.”

Don’t be fooled though these hoppy beers inspired by the ones we already make in the US are a whole separate brand. They don’t pretend to be a clone of something we have in the US. They have their own stories, labels, and characters. The first in the series to be produced are Neoanderthal, an American IPA, and Plus One, and American Pale Ale.

Against the Grain Europe tells the story of the European versions of our established style characters, Session, Hop, Whim, Dark, Malt, and Smoke lead by our newest character, Touri. She’s our international tour guide taking our European characters on a journey across America visiting landmarks like the Statue of Liberty, Grand Canyon, and who knows, maybe even Hollywood!

These unique beers will be brewed and bottled in Germany then distributed throughout Europe where a host of our core brands are already present like, Germany, France, and Spain.