(Louisville, KY) – It’s that time of year again. Bo & Luke is back and we’re gonna party like them good ole boys do! 2017 marks the fifth anniversary for this coveted barrel aged imperial smoked stout and we’re throwing a party that beats all you ever saw! 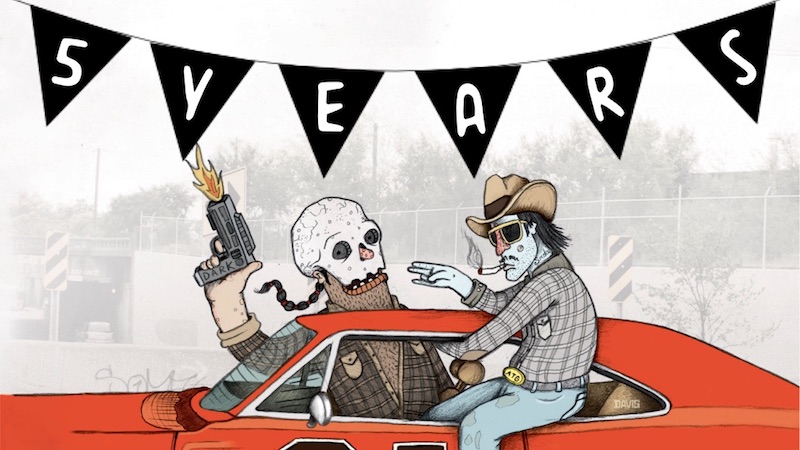 This year’s bottle release will be going down at Copper & Kings Distillery on October 21st from 2:00 PM to 10:00 PM. A limited number of 750 ml bottles and 4-packs that include three Bo & Luke variants will be available for purchase, and we’ve added a few party favors on account it’s a special occasion.

We’ve invited some of our Kentucky pals to the party for a guest brew fest, as well as on-site tattooing from The Hornet’s Nest, giant Squallis puppets, food trucks, and music from The Riflemen, Nick Dittmeier and the Sawdusters, and Whiskey Daredevils. Plus, a portion of proceeds will benefit local non-profit Squallis Puppeteers.

We’re also adding a VIP experience that will blow the daisy dukes right off yer behind! In addition to a secured opportunity to buy a Bo & Luke 4-pack, VIP guests will have access to a private indoor party and an exclusive option to purchase Bo & Luke Brewskey, a barrel aged spirit distilled by Copper & Kings from Bo & Luke beer and Cr&ftwerk, a mature brandy aged in Bo & Luke barrels.

Bo & Luke is one of Against the Grain’s most sought after beers. Our beloved spirit, Kentucky bourbon, inspires it by employing the essential ingredients of bourbon and is conditioned in freshly dumped bourbon barrels for three Kentucky months. The resulting beer is dark, smoky, with hints of vanilla and spice that has everybody reeling for more.

Limited availability ain’t no joke, so we’re offering pre-sale tickets for a secured opportunity to buy a 4-pack or VIP ticket online. They go on sale at 10:00 AM September 16th.

Sure sounds like a down right good time! So save the date, get a ticket, and grab yer best flannel. This is one heckuvah good time you don’t want to miss.