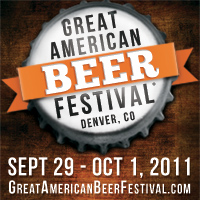 As we get closer to the 2011 Great American Beer Festival, we are finding out more inside info on what’s being poured including Firestone Walker, The Bruery and Green Flash Brewing. These three brewers wish not to reveal what they will be entering into the beer judging competition. Hope you enjoy, cheers!

Beers being poured at the festival

DBA
Pale 31
Union Jack
Double Jack
Velvet Merkin
Plus a special, yet to be announced beer each session – except Sat night.

Beers being poured at the festival