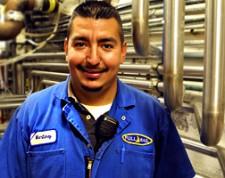 This beer was Francisco’s first “shiftie” (what the crew calls after work beers). He had a pint on the day he started as a packager at Full Sail, and he wanted to honor that first beer.  According to Francisco, “the name says it all, as ‘Clara’ means ‘clear’ in Spanish. I thought this style would be the perfect shift beer to share with the crew on the warm summer afternoons that July will bring.”

“I brewed Faria’s Clara with a combination of Wheat, Pilsner, and Pale Malt and hopped it with a small amount of Saaz hops in the first addition of the boil, then added a combination of Perle and Saaz in the whirlpool to help achieve the subtle bitterness and aromas that I was looking for.”  This highly quaffable beer is straw blonde in color and pours crystal clear in the glass. It has a light body and a delicate hop flavor, with a dry clean finish. “Cheers to Full Sail for giving me this great opportunity to become a Brewer and to make my own beer,” added Francisco.  ( ABV 6 IBU 25).

Full Sail has scheduled two “Meet the Brewers and the Beer” events.  The first event is at Full Sail Brewing at Riverplace in Portland, Oregon, on Tuesday, July 16th from 5:00 to 6:00PM.  The second is at their Tasting Room and Pub in Hood River, on Thursday, July 18th from 5:00 to 6:30PM.  Join the Full Sail Crew to celebrate Oregon Craft Beer Month and toast a pint of Francisco’s new brew.

With each Brewer’s Share series beer, Full Sail picks a local charity to receive a portion of the proceeds from the sale of the beer. Francisco has chosen to support the Hood River Valley Adult  Center  Meals on Wheels Sponsor a Senior program.  Every keg of Francisco’s lager benefits this organization.

The independent and employee-owned Full Sail Brewery is perched on a bluff in Hood River, Oregon, overlooking the most epic wind and kite surfing spot in the world. At this very moment our specialists in the liquid refreshment arts are crafting barley and hops into your next beer. Among the company’s most popular brews are Full Sail Amber, IPA, Limited Lager Series, Pub Ale Series, Session Premium, Session Black, and Session Fest lager. Founded in 1987, the Full Sail crew has been fermenting godlike nectar for 26 years.  Committed to brewing great beer and sustainable practices their award winning brews are now available in 30 states. The Full Sail Tasting Room and Pub is open seven days a week. Swing by for a pint, grab a bite, tour the brewery, or just soak up the view.  http://www.fullsailbrewing.com