(Grand Rapids, MI) – Founders Brewing Co. has announced today that it will introduce Azacca IPA, an IPA using just one, relatively new, experimental hop, as the first seasonal offering of 2016. Azacca IPA is brewed exclusively with Azacca hops, a special variety grown by Yakima-based Roy Farms. Named for the Haitian god of agriculture, the Azacca hop variety is distinguished by intense, tropical fruit notes. Azacca IPA includes a touch of caramel malt to provide a sweet backbone to the citrus, mango and orchard fruit flavors in this 7% ABV beer. The label artwork symbolizes the god of agriculture watching over a field where the ingredients used to brew the beer are being grown. 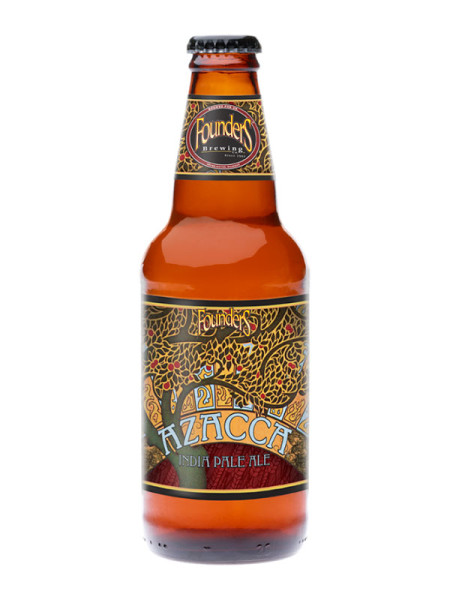 “It’s no secret that hops inspire us,” notes Brewmaster Jeremy Kosmicki. “I love to design beers that showcase the profile of new varieties. One of my favorite things about Azacca is how versatile it is throughout the brewing process; it’s great for bittering, flavoring, aroma and dry-hopping, and the citrus and tropical fruit characteristics make it ideal for an American-style IPA.”

Azacca IPA will be available on draft and in 12oz. bottles across the Founders distribution network, which now includes 37 states, January through March 2016. The suggested retail price is $9.99 per 6-pack.

About Founders Brewing Co.
Established in 1997 by two craft beer enthusiasts—Dave Engbers and Mike Stevens—with day jobs and a dream, Founders Brewing Co. brews complex, in-your-face ales, with huge aromatics and tons of flavor. Founders ranks among the top 20 largest craft breweries in the U.S. and is one of the fastest growing. The brewery has received numerous awards from the World Beer Cup and the Great American Beer Festival and RateBeer and BeerAdvocate users often rate its beers among the best in the world. Located in downtown Grand Rapids, Michigan, Founders is a proud member of the Michigan Brewers Guild.