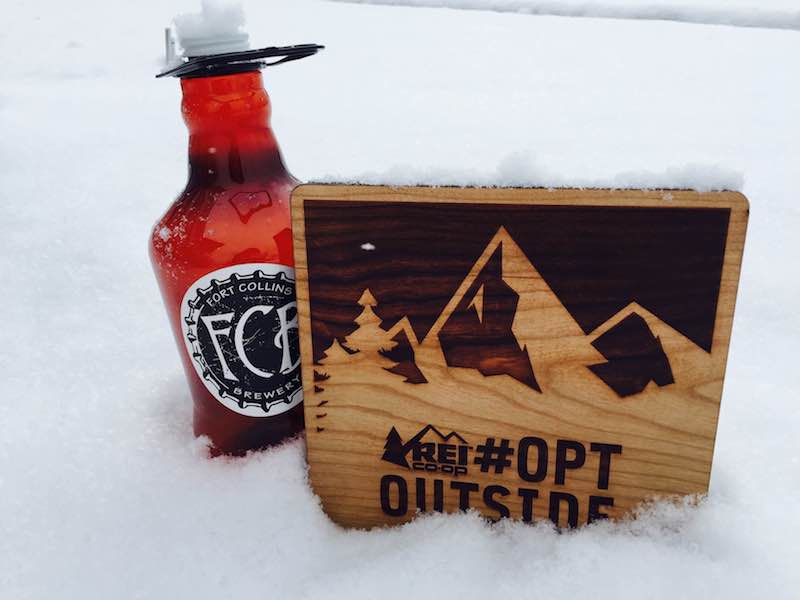 Jerry Stritzke wrote an open letter to announce the Opt Outside campaign by stating that, “For 76 years, our co-op has been dedicated to one thing and one thing only: a life outdoors. We believe that being outside makes our lives better. And Black Friday is the perfect time to remind ourselves of this essential truth.” Craft beer is an equally passionate industry about quality of life and a belief in doing what you love both professionally and personally. With these two core principles in mind, FCB extended a promotion valid to all local Colorado REI co-ops to enhance any REI employee’s Black Friday spent outside, not in the aisles of department and retail stores alike.

Any REI employee presenting their employee card at FCB Modern Tavern on Black Friday will receive a FREE growler fill of any FCB craft beer or craft soda in one of FCB’s plastic, recyclable and portable growlers. Word
quickly spread of this promotion at the local Fort Collins REI Co-Op, with general manager Jason Orr and National CEO Jerry Stritzke coming to the brewery to present FCB with a thank you plaque. “REI’s Opt Outside campaign struck a chord with us and we wanted to contribute by offering the opportunity for REI staff members to receive some complimentary FCB craft beer or craft soda to pair with their outdoor activities for the day,” stated FCB Co-Owner and General Manager Tina Peters.

FCB and REI are taking it one step further this season, and are extending an offer to all REI Co-Op members. Anyone who shows their REI member card at the FCB Modern Tavern this Black Friday will be rewarded with Buy One, Get One Free pints of FCB’s full-time beers. FCB’s Brand Ambassador, Josh Hall stated that “we wanted to extend an offer to members as well this year; we saw such great success with the employee campaign last year, and that sparked the desire to provide even more post-adventure beers.” As Orr stated, REI is a different kind of business. “We’re Your Outdoor Co-Op here in Fort Collins, and we appreciate FCB being a different kind of brewery: innovative, local, and with a heart for sustainability.”

It is the hope of both REI and FCB that the Opt Outside campaign strikes a chord with not only other business, but also individuals to get outside and give thanks for the great gift of exploring the outdoors – leaving the lines for another day.

About FCB and Modern Tavern: Fort Collins Brewery & Tavern is a family-owned, handcrafted microbrewery and full service tavern in Northern Colorado, established in 2003. FCB offers an outstanding lineup of 50 ales and lagers that can be found on tap as well as in cans throughout the U.S. FCB is a 2015 GABF® Gold Medal Winner for Oktoberfest in the Dortmunder/German-Style Oktoberfest category. For more information, visit fortcollinsbrewery.com or call 970-472-1499. Brewery tours run Monday – Friday by appointment and Saturday from 12 – 4 p.m. (at the top of the hour). Create – Share – Savor