(Fort Collins, CO) – May 12th, Fort Collins Brewery (FCB) will be releasing the Savor Series’ second beer, Kettle-Soured Dark Cherry Imperial Red Ale. The Savor Series is a limited batch reserve series featuring styles that don’t hold back. In the past, FCB has had fun exploring fruit beers and has continued to explore how fruit can be highlighted by certain techniques and styles. Said FCB Owner and General Manager Tina Peters, “With May being a prime time for cherry harvesting, we thought a super tart cherry ale would fit in our new lineup nicely.” 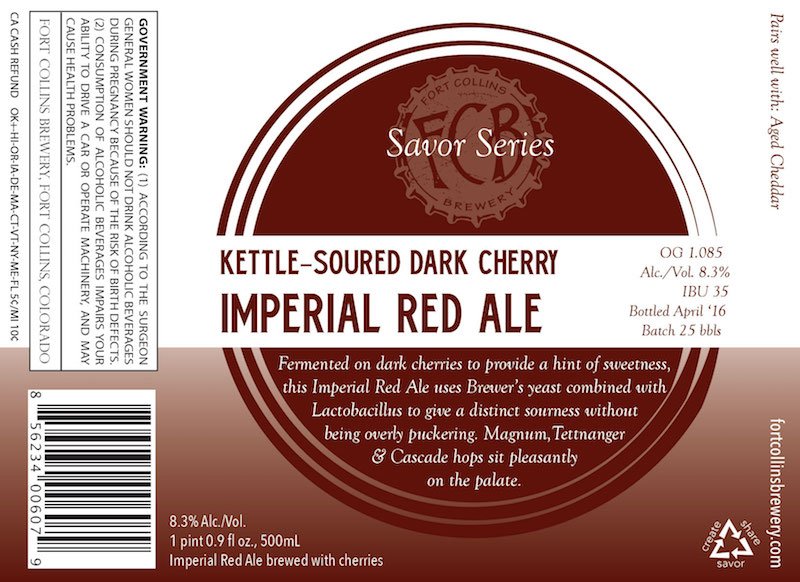 As part of the rebrand, one of the styles that FCB was excited to utilize was Kettle Souring. With this technique, lactobacillus is added to the brew kettle right before the heat is turned up. The wort then rests until an ideal acidity level is achieved upon which your normal boiling and fermenting will occur.

At 8.3% ABV, tart cherries will bring a lively flavor to the red ale. “This beer is intensely sour, due to the 5 different lactobacillus strains that we used,” said FCB Brewer Shaun Salyards. “The caramel malts that make up the body and the cherries added in during fermentation help prevent the beer from being face-distortingly puckering.”

Kettle-Soured Dark Cherry Red Imperial Ale will have limited quantities available on draft and in 500ml bottles in Colorado as well as within FCB’s distribution footprint.  For more information about FCB’s Scarlett on Brett, go to www.FortCollinsBrewery.com.

Live outside of Fort Collins? Sign up here for insider news about the Savor Series.

Live outside of Fort Collins? Sign up here for insider news about the Savor Series.

Fort Collins Brewery & Tavern is a family-owned, handcrafted microbrewery and full service tavern in Northern Colorado, established in 2003. FCB offers an outstanding lineup of 50 ales and lagers that can be found on tap as well as in bottles throughout the U.S. FCB is a 2015 GABF® Gold Medal Winner for Oktoberfest in the Dortmunder/German-Style Oktoberfest category. For more information, visitfortcollinsbrewery.com or call 970-472-1499. Brewery tours run Monday – Friday by appointment and Saturday from 12 – 4 p.m. (at the top of the hour).
Create – Share – Savor