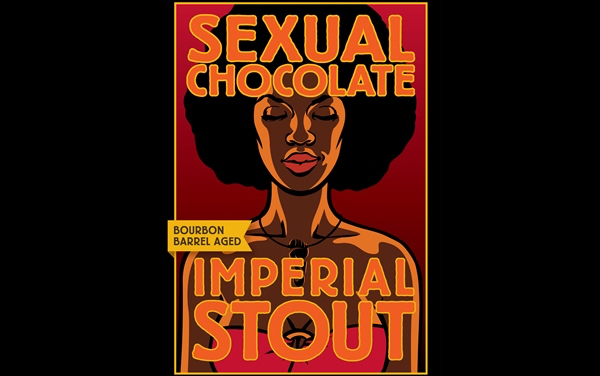 Here at Foothills, we have a little autumn tradition of our own. It actually starts the previous winter, when we brew our iconic Sexual Chocolate Russian Imperial Stout. We squirrel away (intentional seasonal reference) a small percentage of the overall yield in bourbon barrels (usually Buffalo Trace) and let it age into a heady, boozy elixir that we release as the calendar turns to the fall months. The beer has a 100 rating on RateBeer, a 96 rating on Beeradvocate, and is often called one of the most sought after and coveted beers in America.

It’s a tradition we’ve had for over a decade – a tradition that will see an exciting new chapter when we release this year’s version of Bourbon Barrel Aged Sexual Chocolate on Friday, August 24 and Saturday, August 25.

This year, in addition to our regular bottles of BASC, we are bottling/kegging a brand new version of the beer. You know that hip coffee roasting joint we opened earlier this year, Footnote? Well, Joe our head coffee roaster (yes that’s really his name) selected some very special Peruvian beans to roast, which we have used to infuse a few select barrels of BASC. We’ll have a limited bottling of Coffee Infused Barrel Aged Sexual Chocolate, which will be on sale exclusively at our downtown pub on Saturday of Release Weekend.

FRIDAY, AUGUST 24
4pm: We will tap 2018 Barrel Aged Sexual Chocolate at all 3 of our locations (pub, Footnote, and tasting room).

7pm: Annual Bottle Share Party – this year the party moves to Footnote, right next door to the pub. For those of you new to all this, we basically throw a big party the night we release this beer. The cost of admission is a bottle (or two) (or six) of your favorite craft beer – the rarer the better. It doesn’t have to be a whale, but don’t show up with a six pack of Corona Premier either.

11pm: Friday Night Flicks: Every Friday night our pub shows a movie on the big bar screen. This night’s selection is (naturally) Coming to America.

This is a good time to talk about camping out. Used to be, that’s pretty much what you had to do to get bottles of this beer. We’d have 150-200 people in line before the pub doors opened on Saturday morning.

We make more of the beer now than we did back then . . . but it is by no means an unlimited supply. Plus, we will have a brand new, limited edition version for sale in bottles as well – which we expect to get snapped up rather quickly.

Bottom line – the only indicator of when to show up will be your own good judgement.

Please do not ask us on social media when you should show up – we honestly don’t know. Besides, knowing exactly when to show up would be counter to the communal nature we try to create with this release. Whenever you show up, there will be fellow craft beer lovers to meet, drink and celebrate with.

Oh, and if you do decide to camp out –
start the line at the 4th Street breezeway entrance of Footnote
not the pub . . . Footnote will be the first location to open Saturday.

SATURDAY, AUGUST 25
7am: Footnote opens, and you get your very first affogato
chance to taste Coffee Infused BASC on draft (regular BASC will be on tap as well). But that’s not the only special treat we have for you . . . it’s also your first chance to try our brand new Sexual Chocolate Gelato. It’s been handmade by West End Coffee House, right around the corner from our pub. (We’ve tasted it already; the word ‘saporous’ comes to mind) But be careful; it’s made with the actual beer, which means it’s got alcohol in it. We’ll have scoops available all day at both Footnote and the Pub.

Our Footnote staff is pretty geeked up about the gelato, so much so that they’ve made a special coffee drink out of it. Sexual Chocolate Affogato has a scoop of Sexual Chocolate Gelato with two shots of espresso poured over it, topped with dutch chocolate bourbon whipped cream. Yeah.

8am: the party moves over to the pub. Doors open at 8am, we’ll wristband everyone as they come in to determine bottle purchase order. If any of you release veterans (or rookies for that matter) want to line up early, please make sure the line runs east up 4th Street (away from the wonderfully monstrous hotel being built next door to us). First 50 people or so in the door receive a free limited edition Sexual Chocolate sticker.

In addition to having BASC and Coffee Infused BASC on tap, the Pub will have a few thematic food specials as well. Chef Shane is whipping up a Sexual Chocolate Bourbon Barrel Smoked Cheeseburger with Sexual Chocolate BBQ sauce and fried onion straws. We’ll also have coffee braised pulled pork tacos with spinach, smoked pineapple, and chipotle lime sour cream; and our Smoked Chicken Wings that day will be smoked on BASC barrel staves.

ALSO ON SATURDAY
9pm: The tasting room will end BASC Release Weekend as only they know how. The brewery’s being transformed into Studio 54, complete with disco, DJ, dancing, live roller skating and singing performances, and of course plenty of Barrel Aged Sexual Chocolate and Coffee Infused Barrel Aged Sexual Chocolate on draft. There’s also a photo booth – so dust off your 70s duds and bring your biggest Elton John sunglasses. There will also be a food truck on site. (this event is 21+ only)

Gonna be a great weekend – hope you can make it!