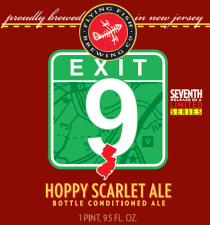 “Exit 9 is better known as ‘the Rutgers University exit,’ so we crafted this Hoppy Scarlet Ale as a nod to their school color, scarlet,” says founder/president Gene Muller, a Rutgers Alumnus.

On March 9, from 6 to 9 p.m., Flying Fish will introduce Exit 9 to the public with a special launch party at George Street Ale House (378 George St., New Brunswick, 732-543-2408).   There will also be a series of other release events throughout the region, all listed on the Flying Fish Events Calendar.

Created by Head Brewer Casey Hughes, Exit 9 Hoppy Scarlet Ale is a richly flavored red beer crafted with a variety of domestic and imported malts and a classic American yeast strain.  It is assertively hopped with Amarillo, Centennial, Chinook and Citra hops for a bouquet with complex notes of citrus and tropical fruits and an appropriate bitterness in the finish.  Hughes recommends it with spicy foods, such as gumbo or curry, as well as alongside rich blue or sharp cheddar cheeses, or just by itself.

Flying Fish was the world’s first ‘virtual’ microbrewery, establishing an Internet presence as early as 1995.  That presence helped to generate press interest and woo investors to the fledgling brewery, which would not open for business until late 1996.  Today, Muller and his team oversee four full-time styles, as well as a variety of seasonal beers.  Their brews have been featured at the Great British Beer Festival, Oregon Brewers Festival and Canada’s Biere de Mondial Festival.  They have won medals at the Great American Beer Festival, Real Ale Festival and the World Beer Championships, and are the only New Jersey brewery featured in Best American Beers.  Flying Fish was also named “Local Hero: Beverage Artisan of 2009” by Edible Jersey magazine.

For more information about Exit 9 or any of Flying Fish’s beers, please visit them online at www.flyingfish.com and www.exitseries.com, or call (856) 489-0061.