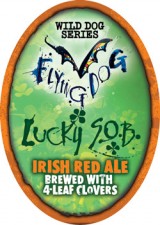 As four-leaf clovers float into the brewkettle, the following poem is read aloud:

“We can’t guarantee you will get good luck by drinking a beer brewed with four-leaf clovers, but are you really willing to risk it?” Flying Dog’s VP of Marketing, Ben Savage, asked. “You get 7 years of bad luck for breaking a mirror or walking under a ladder, so it’s probably not worth rolling the dice.”

Lucky SOB has toasted honey notes with a subtle hop bite and finishes sweet, clean, and refreshing. And at 5% ABV, it’s the perfect accompaniment to chants of “Erin Go Braugh.”

“It was unanimous that we all wanted an easy-drinking, but still flavorful beer for St. Patrick’s Day,” Brewmaster Matt Brophy said. “With a name like Lucky SOB, we needed to have fun with it.”

Lucky SOB Irish Red will premiere on Tuesday, March 6 at Bushwaller’s Irish Pub in downtown Frederick, Maryland. It will be available on draft only in Maryland, Virginia, Pennsylvania, New Jersey, New York, and Washington, DC through St. Patrick’s Day.

About Flying Dog Brewery
“Good Beer, No Shit.” Located in Frederick, MD, Flying Dog is Maryland’s largest brewery. As its tagline proclaims, Flying Dog is committed to producing world-class craft beer and continues to push the envelope with experimental and limited-edition releases. Recent accolades include Doggie Style Classic Pale Ale ranked as the #1 American Pale Ale in the U.S. by The New York Times and Raging Bitch Belgian-Style IPA named one of the best new beers in 2010 by multiple sources. For more information, please visit www.flyingdogbrewery.com.