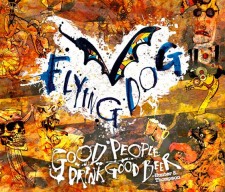 “Sustainable, locavore, eco-conscious are often intimidating concepts for your average consumer,” Flying Dog VP of Marketing Ben Savage said. “We want to make each of those concepts approachable and actionable for our fans while showcasing local artists and highlighting the artisanal nature of craft beer.”

Support Local also features a series of videos that examine a range of artists – from the culinary arts to alternative sports to the beer itself – and showcase the breadth of talent in Flying Dog’s backyard of Maryland, Virginia, and Washington, DC. Flying Dog kicked off the initiative this week with a piece on aerial sculptor Tim Scofield.

“This first video aims to shift people’s mindset on art,” Savage said. “To us, the people crafting these local, sustainable products are all artists. So we’re posing the question ‘what if you were an artist?’ to our fans to get them thinking about art in a different way.”

Support Local will culminate September 9 through 15 with Support Local Week, where Flying Dog will encourage and provide the tools for its fan base to shop, eat, and (of course) drink local for the entire week. Partnering with farm-to-table restaurants in Maryland, Washington, DC, and Northern Virginia, the brewery will host events each day of Support Local Week. And on Saturday, September 15, the brewery will throw a Harvest Party to end the week and celebrate the launch of Secret Stash Harvest Ale.

“We brew Secret Stash every fall with locally-sourced ingredients,” Brewmaster Matt Brophy said. “The recipe changes each year to reflect the season’s harvest, creating an exciting and ever-evolving beer style for us.”

The Harvest Party will feature the farmers who provided ingredients in Secret Stash, each of the Support Local video subjects, artisanal vendors, and more. Tickets for the party will go on sale next week.

About Flying Dog Brewery:
“Good Beer, No Shit.” Located in Frederick, MD, Flying Dog is Maryland’s largest brewery. As its tagline proclaims, Flying Dog is committed to producing world-class craft beer and continues to push the envelope with experimental and limited- edition releases. Recent accolades include Doggie Style Classic Pale Ale ranked as the #1 American Pale Ale in the U.S. by The New York Times and Raging Bitch Belgian-Style IPA named one of the best new beers in 2010 by multiple sources. For more information, please visit www.flyingdogbrewery.com – @flyingdog – facebook