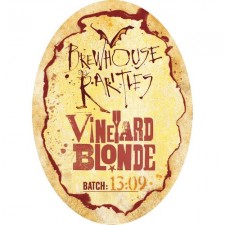 An Orchard Ale brewed with fresh-pressed apple juice from Distillery Lane Ciderworks in Jefferson, Maryland will be released next week. In November, Flying Dog will release Vineyard Blonde, a Belgian-inspired ale brewed with Vidal Blanc grape juice from Breaux Vineyards in Purcellville, Virginia.

“Beer is directly tied to agriculture, so it makes sense to showcase other locally-sourced agricultural products,” Brewmaster Matt Brophy said. “Our Brewhouse Rarities series encourages our brewers to push the confines of modern beer styles, and both of these releases do exactly that.”

The Orchard Ale was brewed with 1,000 gallons of apple juice and fermented with El Diablo, the Belgian yeast strain Flying Dog made famous in its Raging Bitch Belgian-Style IPA. It then went through a secondary fermentation with a champagne yeast strain to showcase both the apple and fruity yeast notes and create a crisp and clean finish.

Distillery Lane is one of three cider distilleries in Maryland. Owners Patty Power and Rob Miller grow over 50 apple varieties on their farm and all of their ciders (fresh and hard) are made from estate-grown apples.

“We are excited about supplying Flying Dog with our cider for their Orchard Ale,” Patty Power, co-owner of Distillery Lane Ciderworks, said. “Distillery Lane shares Flying Dog’s commitment to high-quality ingredients. Our cider is produced only from specialty apples grown on our Frederick County farm and blended to create the perfect sweet, sharp, and bitter blend high in flavor, acid, and tannins.”

With 105 acres of planted vines, Breaux Vineyards is the largest producer of estate-grown Vidal Blanc grapes in Virginia. To make the 500 gallons of juice used in the Vineyard Blonde, three and a half tons of grapes were harvested during the week of September 23.

“At Breaux Vineyards we’re all fans of Flying Dog beer, so when the chance came along to collaborate with a staff-favorite brewery and a company that shares in our devotion to combining creativity with a relentless pursuit of quality – we couldn’t resist,” Lawrence S. Camp, business development manager for Breaux, said. “The timing is right for this proud moment in our region; the blending of our companies, industries, states, and world-class products is something we all can be excited about.”

Both beers will be released on draft only in the mid-Atlantic markets.

“Good Beer, No Shit.” Located in Frederick, MD, Flying Dog is Maryland’s largest brewery. As its tagline proclaims, Flying Dog is committed to producing world-class craft beer and continues to push the envelope with experimental and limited-edition releases. Recent accolades include Doggie Style Classic Pale Ale ranked as the #1 American Pale Ale in the U.S. by The New York Times and Raging Bitch Belgian-Style IPA named one of the best new beers in 2010 by multiple sources. For more information, please visit www.flyingdogbrewery.com.

GABF 2013 – What is Ska Brewing Sending? What is Elevation Beer Co. Sending to The Great American Beer Festival?