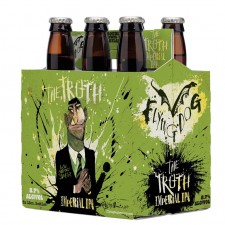 Frederick, MD – Flying Dog Brewery is releasing a brand-new beer, The Truth Imperial IPA, as a year round addition to its portfolio. The Truth was developed alongside the brewery’s Single Hop Imperial IPA series of over a dozen beers – including Citra, Nelson Sauvin, and Simcoe – released since 2010.

The Truth can be bitter. But it’s also quite refreshing.

“Working with some of the most flavorful and obscure hop varieties for our Single Hop series gave us a great sense of the perfect hop blend for a bold, yet balanced Imperial IPA,” Matt Brophy, brewmaster and COO said. “This beer was over three years in the making.”

Warrior, Summit, CTZ, Citra, and Amarillo hops all contribute to the 120 IBUs in The Truth. The result is sharp hop bitterness with pine, bright citrus, and subtle stone fruit notes. A light malt backbone rounds out this Imperial IPA, which clocks in at 8.7% ABV.

Starting August 15, The Truth Imperial IPA will be available in Maryland and Washington, DC on draft and in 12-oz. bottle six packs.

About Flying Dog Brewery:
“Good Beer, No Shit.” Located in Frederick, MD, Flying Dog is Maryland’s largest brewery. As its tagline proclaims, Flying Dog is committed to producing world-class craft beer and continues to push the envelope with experimental and limited-edition releases. Recent accolades include Doggie Style Classic Pale Ale ranked as the #1 American Pale Ale in the U.S. by The New York Times and Raging Bitch BelgianStyle IPA named one of the best new beers in 2010 by multiple sources.