(Paso Robles, CA) – Firestone Walker Brewing Company, one of the nation’s most acclaimed breweries, is adding to its diverse portfolio with two new beers from its Proprietor’s Vintage and Barrelworks programs. These programs are dedicated to producing some of Firestone Walker’s most distinctive and innovative offerings, made for devoted beer enthusiasts. 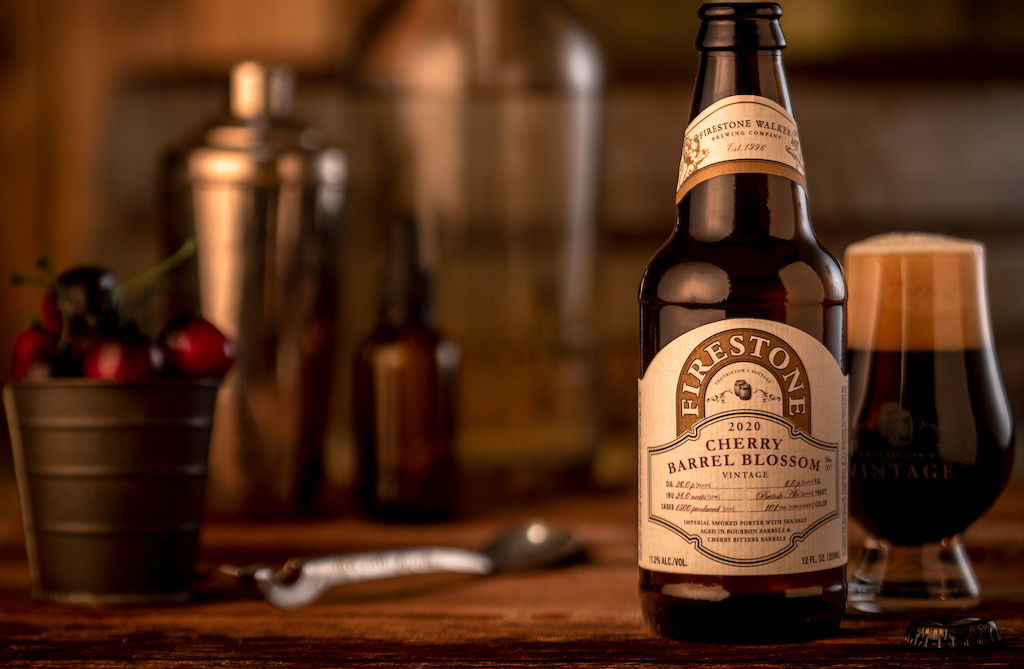 The new beers are available in select Firestone Walker markets and via direct ordering for California residents at FirestoneBeer.com.

Cherry Barrel Blossom is the newest release from the Proprietor’s Vintage series of barrel-aged beers.

This inaugural release features the brewery’s classic smoked porter aged in bourbon barrels and cherry bitters barrels with a dash of sea salt. The flavor profile revolves around a distinctive yet subtle smoked malt character. “Cherry Barrel Blossom is my own barrel-aged spin on the German Rauchbier smoked beer style,” said Eric Ponce, Firestone Walker’s barrel program manager. “The cherry bitters barrels brought fruity accents to the bourbon-driven flavors of vanilla, tobacco and chocolate, while the inclusion of sea salt elevated the mouthfeel.”

Blue Love is the latest libation to be liberated from Firestone Walker’s Barrelworks wild ale facility. Conceived by Barrelworks’ master blender Jim Crooks, Blue Love is an inaugural wild ale fermented with fresh Pacific Northwest blueberries. Blue Love is Firestone Walker’s first foray into the blueberry wild beer phenomenon and offers a massive blueberry aroma and flavor balanced by soft acidity and insane drinkability. It was aged in French oak barrels, then co-fermented with 10,000 pounds of specialty “Bluecrop” berries, which were selected for their intense fruit character.

Both Crooks and Ponce go to immense lengths to source the right ingredients and type of barrels for each beer, from sourcing the most expressive fruits from a specific region to pinpointing the perfect spirits barrels to ensure that each release is more innovative than the last.

“At Firestone Walker, we are constantly working to develop new and bold flavors, and we are extremely proud of these latest releases,” Ponce said. “Both the Proprietor’s Vintage and Barrelworks programs are curated for the true beer enthusiast in constant pursuit of the next beer to excite their palate.”

To locate where all Firestone Walker beers are sold, visit FirestoneBeer.com.