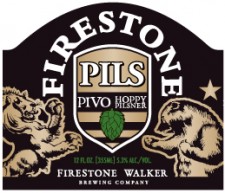 The Full Pint wrapped up their hallmark poll last week, in which our loyal, thirsty readers chose the best craft beer of 2013.  In a very close race, Firestone Walker Pivo Hoppy Pils won in the end.  In the world of bourbon barrel aged stouts and ultra hopped IPAs, this is quite a remarkable feat, and hopefully paves the way for other craft breweries to take a stab at brewing a quality craft lager. It’s now our duty to keep an eye on standout beers that debut here in the present.

Here is a word from Firestone Walker’s Brewmaster, Matt Brynildson regarding their close win in our poll:

“The Full Pint is frequented by some of the savviest and most fanatical craft beer drinkers out there, so we are stoked to receive this honor, and to be in the company of the poll’s many other amazing brews. The response to Pivo Hoppy Pils has been off the hook since we released it last spring, and it’s great to see the pilsner style gathering steam at the craft level.”

One of the biggest controversies of our poll was Saranac Legacy IPA. This beer wasn’t nominated by The Full Pint, nor was it nominated by our readers. Like any other brewery or beer, any beer can be written in. People not familiar with Saranac or Saranac Legacy IPA complained and questioned how they did so well in this poll. It’s simple my friends. F.X. Matt Brewing was ranked 8th largest craft brewery in the country in 2012 and 12th largest brewery in the country that same year. That’s a lot of barrels of beer and thus a large footprint of Saranac beer drinkers. Saranac also took one of The Full Pint’s tips to heart, and rallied the troops. They plugged their participation on the poll with State Assembly Men on Twitter as well as local radio.  We admire their spirit and encourage any other participating brewery to get down like that.