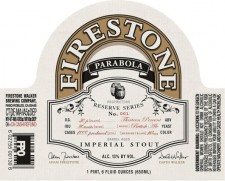 Firestone Walker will be releasing Batch 2 of Parabola very shortly. Below is the press release from Firestone Walker, but before you jump into that ,we asked a few questions about this years release.  We wanted to find out if there were any differences from last years release in terms of recipe, yield and distribution. Here it is: This years yield went up, as well as some very minor stats on the final product. 3000 cases this year, going to CA, NV, OR, WA, AZ, MD, NJ, NY, NH, DC, Philly, Chicago. 29.5 P this year vs. 30P last year 82 vs. 80 IBU 12.5% ABV vs 13%.

Paso Robles, Calif — “This beer is insane,” Dustin Kral, Head Brewer of Firestone Walker Brewing Co. said. “Don’t get me wrong it tastes amazing, but this beer is tough to brew.”

Parabola, Firestone Walker’s Bourbon barrel-aged Russian imperial stout, takes twice as long to brew as any other beer that Firestone makes, not counting the time that it spends in bourbon barrels.

“Our guys are perfectionists too,” Kral continued, as he pulled his paddle through the mash, “so we’re not gonna just let that malt burn, we have to get in there and stir the mash; look at it, it’s as thick as a cookie.”

The recipe for Parabola calls for a massive amount of malt that overwhelms the mash tun. The brewers are forced to manually stir the two-ton mash to avoid scorching, all the while making sure that the other parts of the brewhouse are running normally.

Parabola requires twice as much malt to yield half the volume of each brewhouse cycle compared with other Firestone Walker beers. This extra time and effort puts an even bigger strain on brewers that are already brewing 24 hours a day, nearly seven days a week.

But all of the work is worth it, according to Matt Brynildson, brewmaster for Firestone Walker.

“The response that this beer receives from our fans justifies the extra effort,” Brynildson said.

The final product is a one of the most sought after beers that Firestone Walker brews despite the fact that this June will be only the second time that it has been released in bottles.

“Parabola is a thing of beauty; thick as two short planks,” Walker said.

The beer ends up being as thick as any beer on the planet with a luscious aroma and taste that are only amplified as it warms up. Tastes and smells of Bourbon, coffee, vanilla, tobacco and leather all greet the taste buds of those lucky enough to get a hold on this limited offering.

This year’s Parabola goes on sale for the first time on Saturday, May 21 at Firestone Walker’s brewery in Paso Robles and restaurant in Buellton, CA.  Only 3,500 cases will be released of the 2011 vintage, in 22oz bottles. There will also be a limited release of kegs to bars and restaurants around the country. Places that will be receiving Parabola will include CA, NV, OR, WA, AZ, MO, Chicago, MA, NJ, NY, VA and PA.