(Paso Robles, CA)  – Firestone Walker Brewing Company, one of the nation’s most acclaimed craft breweries, today announced the release of Flyjack. An innovative low alcohol, low-calorie beer, Flyjack has all the unique characteristics of a hazy IPA with only 96 calories, five grams of carbs and 4 percent ABV. 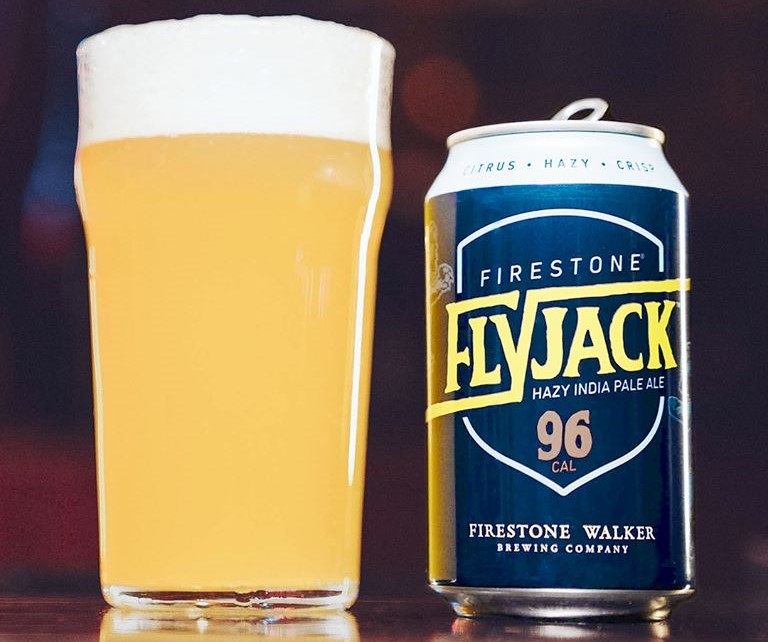 Flyjack is packed with a big hop aroma and has a true hazy IPA  flavor profile that is lush and full yet refreshingly crisp with hints of citrus. Flyjack is designed for drinkers who keep an active and healthy lifestyle, but don’t want to sacrifice flavor for fewer calories. The hazy IPA was built with big bold hops, including the new and powerful Strata hop, to deliver more aroma at lesser quantities. Flyjack uses an expressive yeast strain that heightens ester and fruit character to put body and flavor into the beer without adding calories.

Founded by brothers-in-law Adam Firestone and David Walker, Firestone Walker Brewing Company is a family-run craft brewery from the California coast, with three state-of-the-art brewery facilities in Paso Robles, Buellton and Venice that produce a wide range of beers from pale ales to vintage barrel-aged beers, and was recently named “Best American Brewery of the Decade” by Paste Magazine.

Firestone and Walker, along with their longtime brewmaster Matt Brynildson, created Flyjack amid a changing market dynamic that increasingly favors healthful choices. According to recent data from the Nielsen Company, one-quarter of beer drinkers are currently more interested in consuming alcohol beverages made with wellness in mind, so Firestone Walker Brewing Company decided to create a 96 calorie hazy IPA–one of the first of its kind–to complement its diverse portfolio.

True to the brewery’s mantra of “the pursuit of the perfect beer,” Firestone Walker Brewing Company remained patient as the ranks of lower-calorie craft beers swelled over the past 18 months. They underwent a rigorous R&D process to find the right hops that offered the best flavor, texture and fruit; the right malt selection to achieve the signature haze and mouthfeel of hazy IPAs and a yeast strain that ties it all together by accentuating flavor without adding any additional calories.

“Beer culture is expanding and is becoming more inclusive,” Brynildson said. “People care about their lifestyle, they care about what’s in their beer, and many care about calories. With Flyjack, we wanted to prove that you don’t have to sacrifice flavor for calories. Flyjack is a full-flavored, easy-to-drink beer that delivers on the healthier qualities more and more people are looking for, and is a fresh choice amid an ever-changing landscape of tastes and preferences.”

“I’m confident that FlyJack is one of the best tasting, low calories hazy IPA’s you ever have,” said Walker. “I’m really excited for everyone to try this beer.”

You can view the story behind making the beer with Brynildson here and on firestonebeer.com

Firestone Walker is an innovative California beer company founded in 1996. Firestone Walker’s main brewery in Paso Robles produces a diverse portfolio ranging from iconic pale ales to vintage barrel-aged beers. The Barrelworks facility in Buellton makes eccentric wild ales, while the Propagator pilot brewhouse in Venice specializes in R&D beers and limited local offerings. Firestone Walker is also the brewery behind 805, one of the nation’s fastest-growing beers. More at FirestoneBeer.com.