The next bottling to be sprung from Barrelworks is Agrestic, an American wild red ale that will be released at the Liberation of Agrestic event on September 20. Only 600 cases of 375ml bottles were produced, and they will only be available at Barrelworks and the brewery in Paso Robles. 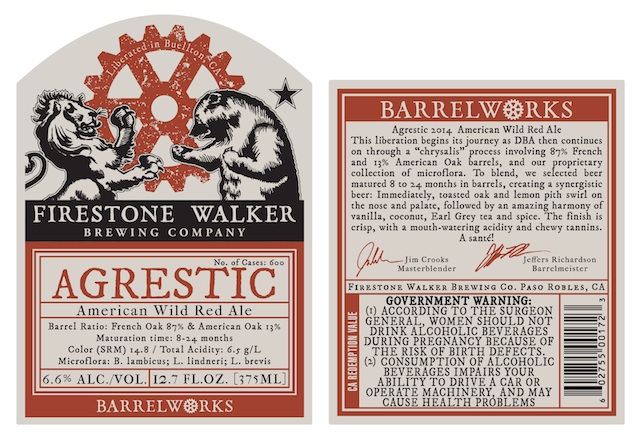 Agrestic is an audacious riff on the brewery’s original flagship DBA British pale ale. It began its brewing journey as DBA, but took a mutinous turn when it was racked to oak barrels and inoculated with a proprietary collection of microflora.

To create the final blend, barrelmeisters Jeffers Richardson and Jim Crooks blended a selection of different agrestic lots matured from eight to 24 months in French (87%) and American oak (13%) barrels. Toasted oak and lemon pith swirl on the nose and palate, followed by harmonious notes of vanilla, coconut, Earl Grey tea and spice. The finish is crisp, with mouthwatering acidity and chewy tannins.

Next Up from Barrelworks in 2014

Feral Vinifera
Feral Vinifera is an ultra-limited release also being liberated on September 20. Feral Vinifera was born of a collaborative effort with local grape growers and winemakers in Barrelworks’ backyard of the Santa Ynez Valley. Sauvignon Blanc, Chenin Blanc and Orange Muscat grapes were co-fermented with wheat-based wort, then inoculated with proprietary wild yeast to create this trailblazing hybrid.

SLOambic
SLOambic is Barrelworks’ foray into the funky world of lambic style beers. It was inoculated with brettanomyces lambicus, brettanomyces bruxellensis and lactobacillus, then infused with ollalieberries to create a distinctively, dry, cidery, fruity, vinuous and oh-so sour beer. November release date TBA.

El Gourdo is what happens when the local pumpkin patch calls the barrelmeisters on the day after Halloween, asking if they want some orphaned gourds. Not only did the barrelmeisters take the leftover pumpkins last year, they roasted them in a pizza oven with brandy staves, bay leaf and walnuts before tossing them into a base wheat beer for secondary fermentation prior to oak barrel aging. We’ll just leave it at that for now. November release date TBA.

Big, malty, and alcoholic, this hefty brew is supported by a firm oaky backbone and slight tartness from its time in French oak barrels in the discreet company of a certain B. Lambicus. Scandalous!  Release date TBA.

Firestone Walker’s Barrelworks is a story of beer, barrels and unintended consequences, of renegade brewers, and of a pet project turning into a wild beast: www.firestonebeer.com/barrelworks.

Maui Brewing Co. Is Returning to The Great American Beer Festival Crossroads Brewing Has Their Sights Set on GABF Gold!