TheFullPint.com has just received the beautiful label for the upcoming Firestone 13.  While we don’t have information on what beers were blended to comprise this beer (yet), we do know a few interesting tidbits.  This beer will be released at the brewery in Paso Robles, Saturday November 14.  The case yield has gone up to 1,000, and will be sold in Firestone Walker’s distribution territories of Arizona, California, Oregon, Washington, and select accounts in the state of Nevada.

About 600 Case Equivalents will be in 6 pack wood boxes(1200 total 6pk)shipped to retailers.

All remaining will essentially be offered to retailers in 12pk cases. Firestone Walker has yet to determine what will be available at the release party.

This beer will be weighing in at 12% abv. from what we’ve been told.  When asked if some of the famous beer bars of California will be getting kegs or firkins of this stuff, we were told no. 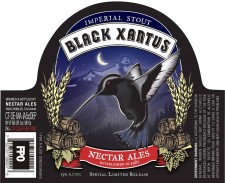 We also just received the label for Black Xantus, which will be Nectar Ales first stab at a strong ale, let alone a strong barrel aged ale. As mentioned in our previous article on this beer, it will be released in 22 oz. bottles, only 500 cases will be made, this COULD be found wherever Nectar Ales are sold. Of great note, Firestone Walker claims select famous beer bars in Calfornia will be getting firkins and pony kegs of this beer.

Please stay tuned to thefullpint.com, as we bring more details about Firestone Walker 13, the celebration party to honor it, as well as possible bottled offerings of Parabola and Abacus.