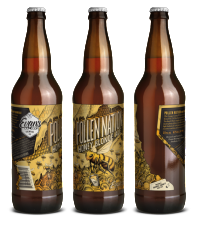 (Irvine, CA) – Evans Brewing Company has announced the release of four bottled beers that will constitute the core of initial year-round packaged offerings produced at its Orange County, California brewery. The first four packaged year-round beers offered by Evans Brewing are Pollen Nation Honey Blonde Ale™, The KrHOPen India Pale Ale™, Oaklore Brown Ale™, and ChocōLatté Chocolate Porter™, each of which features vivid designed, hand drawn artwork and custom die cut labels highlighting the outline shape of California where the beers are brewed. The four core packaged Evans beers are expected to be joined in the future by additional year-round packaged brews and a rotating cast of seasonal offerings released periodically throughout the year.

“We are extremely excited to present the initial four year-round beers being distributed into the market as packaged products, as well as in kegs,” said Evan Rapport, Vice President of Evans Brewing Company. “The feedback we have received from beer enthusiasts and through competition results has validated the flavor improvements made on each of these beers. We look forward to getting them in front of as many craft beer drinkers as we can.”

Evans Brewing’s award winning Pollen Nation Honey Blonde Ale is a favorite among craft beer enthusiasts and was recently honored with a gold medal at the 2015 Los Angeles International Beer Competition and a bronze medal at the 2015 World Beer Awards. Crisp and refreshing, Evans Pollen Nation Honey Blonde (ABV – 5.2%; IBU – 14) is a clean sessionable blonde ale – a Southern California favorite. It pours straw-like in color, and its subtle aroma and flavor of orange blossom honey makes this a balanced, enjoyable beer all year round.

Evans Oaklore Brown Ale (ABV – 6.5%; IBU – 20), also honored with a gold medal 2015 Los Angeles International Beer Competition and a bronze medal at the 2015 World Beer Awards, is a beer that surprises everyone who first tries it. Complex and drinkable, Oaklore Brown Ale has a silky caramel smoothness but is also malt forward with hints of vanilla and chocolate flavors. The sweet aroma of this beer is derived from the French and American oak chips used post fermentation.

In the crowded IPA world, it can be difficult to stand out, but The KrHOPen India Pale Ale (ABV – 6%; IBU – 73) is Evans Brewing Company’s take on a West Coast IPA that does not punch you with bitterness but provides a balance of bitterness, aroma and body. Initially, the aroma comes with floral and piney notes from over a 1.5 pounds per barrel of Cascade and Chinook hops. At first sip, Nugget and Apollo hops give this beer its balanced bitterness with a hint of caramel and biscuit body for a smooth finish.

ChocōLatté Chocolate Porter (ABV – 6.8%, IBU – 15), bronze medal winner at the 2015 Los Angeles International Beer Competition, is a robust porter, profoundly smooth with a full body. The chocolate and roasted malt give a punch of chocolate flavor with a hint of coffee that gives a pleasant finish but leaves you craving more. CHOCOLATE BOMB!

Founded by Mike and Evan Rapport, Evans Brewing Company has created a superior line of lagers and ales that have been honored with over 20 international awards. Based in Orange County, California, Evans Brewing Company supplies restaurants, retailers and beer drinkers across several states. Future plans for the company include a branded restaurant/taproom, wider product distribution, and an expansion of the beer brands currently under management.