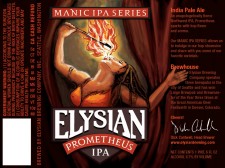 Prometheus has a long and complicated history, beginning back when head brewer Dick Cantwell worked at Big Time Brewery and Alehouse in Seattle’s University District. His assistant at the time was Bill Jenkins, who followed him as head brewer there when Dick left to start Elysian. Offered the chance to come up with a new recipe, Bill originated Scarlet Fire, a reddish IPA with solid hop character. Another head brewer later, this time Kevin Forhan (with whom both Bill and Dick had worked at Pike Place Brewery), a little recipe alteration and a gold medal at the Great American Beer Festival, and Scarlet Fire became a Big Time mainstay.

Fast forward several years later, with brewing stints by Bill in Ireland and Kevin in Spain in the interim, and now-Elysian Fields brewer Kevin, Dick and Capitol Hill helmsman Markus Stinson put their heads together–to Bill’s amusement–to come up with an answer to the Fire. The result was Prometheus, a classically fierce Northwest IPA redolent of Chinook, Cascade and Centennial. Informally referred to as the Stolen Fire–remember that Prometheus stole fire from the gods to provide it to mankind, a crime for which his liver was eaten daily by an eagle– Prometheus has been a cult favorite at the Elysian pubs ever since.

Now for the first time Prometheus is plentifully available in bottles and on draft at local stores, restaurants and alehouses. Nine hop additions offer layer upon layer of hop complexity, with three dry hop additions alone. The beer is light copper-red in color and weighs in at 6.7% abv. Label art shows a fire-eating juggler breathing flames, a fitting image for the next beer in Elysian’s Manic IPA series, earning a place in our new urban pantheon.