Elysian Avatar Jasmine IPA Is Back With a New Look 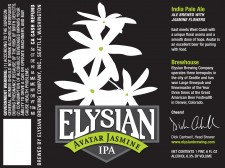 AVATAR JASMINE IPA IS BACK, and in a new package. After a break of several months, while we waited for the new crop of jasmine to arrive from China, one of the most interesting beers in America will be reentering the market in both 22-oz. bottles and on draft. The bottles will have a new label as well, with a more stylized version of the familiar-and elusive-jasmine blossoms used to make the beer.

A great beer is more than the sum of its parts, even when the ingredients, the inspiration and the execution are everything they should be. It was difficult to resist the temptation to use other, more available sources of jasmine, but the wait for the good stuff was worth it. Jumping off from a traditional West Coast IPA, the flavor and aroma of jasmine flowers combine with a somewhat mellower hop finish to create a bridge between the worlds of East and Northwest.

Avatar was first inspired by a fanciful connection during a GABF judging session by one of head brewer Dick Cantwell’s fellow judges, who remarked that one of the IPAs on the table reminded him of jasmine tea. The evocation of jasmine in that beer’s hop character wasn’t enough for it to go on to the next round, but right out of the gate, some years later (2005, to be exact) Avatar medaled at GABF in the Herb and Spice category. Three years later it took top honors in the same category at the World Beer Cup. Draft Magazine also named it one 2010’s top 25 beers, awarding it a score of 98.

Look for Avatar in select draft accounts and on the shelves of your favorite local grocery. It’s a new incarnation of IPA, back and as good as it’s ever been.

Elysian Brewing Company operates three neighborhood brewpubs and a production brewery in Seattle, WA. Known for variety, Elysian has brewed more than 200 different beers since opening its doors in 1996.