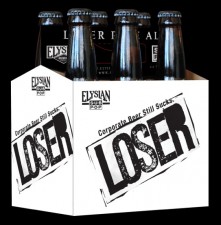 Now in its fourth year of celebrating Sub Pop Records’ twentieth anniversary with Loser Pale Ale, Seattle’s Elysian Brewing announces the release of this year’s Loser in twelve ounce bottles. Six-packs of Loser will hit shelves on May 1. Look for it in local stores cool enough to carry it.

Loser is a distinctive pale ale brewed with Sorachi Ace and Crystal hops, weighing in at 7% abv. Its first brewing in 2009 was a collaboration between Elysian and Sub Pop, and was served backstage at the indie label’s celebration festival held at Marymoor Park, where such classic Sub Pop acts as Mudhoney, Low and Green River played, along with more modern stalwarts such as Iron and Wine and the Fleet Foxes. Bottled Loser bore the slogan “Corporate Beer Sucks,” a reference to the shirt (Corporate Rock Sucks) worn by Kurt Cobain when Nirvana first graced the cover of Rolling Stone. It has come back every year since as a summer seasonal, with later labels reading “Corporate Beer Still Sucks,” a nod to the second Nirvana RS cover appearance.

Both the Loser six-pack carrier and mother case box are generic white with stencil-effect lettering like the crates holding touring bands’ equipment. There’s no end of cleverness when local alternative institutions like Sub Pop and Elysian get together!

About Elysian
Elysian Brewing Company operates three neighborhood brewpubs and a production brewery in Seattle, WA. Known for variety, Elysian has brewed more than 200 different beers since opening its doors in 1996.

About Sub Pop Records
Sub Pop has been Seattle’s premier independent record label for over 20 years, beginning with its founding in 1988 by Bruce Pavitt and Jonathan Poneman. Sub Pop achieved fame in the late 1980s for first signing Nirvana, Mudhoney, Soundgarden and many other bands from the Seattle music scene, and has been blamed for popularizing grunge music. Sub Pop has continued its critical and commercial success with bands such as Fleet Foxes, Beach House, The Head and the Heart, The Postal Service, The Shins, and Band of Horses. Loser was first brewed for Sub Pop’s twentieth anniversary celebration.