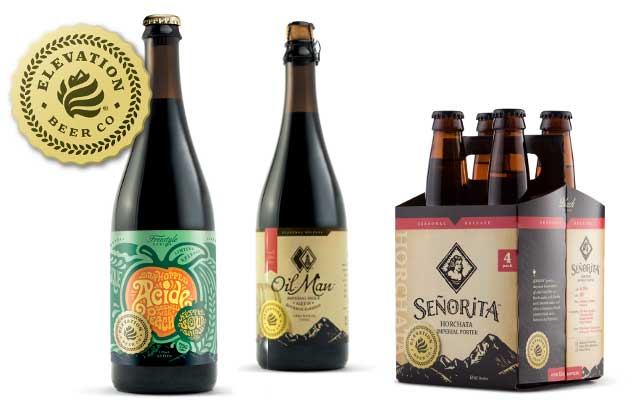 The latest in the brewery’s Freestyle Series, Elevation’s newest kettle sour is a twist on Acide. This limited release was brewed with the addition of peaches. At 4.5% ABV, this sour has just a touch of fruity flavor to accent the original brew’s tartness.

“We had so much fun brewing Acide over the summer that we wanted to experiment with some other flavors,” says Christian Koch, Elevation Head Brewer and Co-Founder. “We thought that some peach flavors would add a nice layer of complexity to that beer.”

Elevation’s winter seasonals will also be on shelves soon. Oil Main (10% ABV) from the brewery’s Double Black series is a deep black Imperial Stout is aged in Breckenridge Bourbon Barrels. As one of the brewery’s most popular winter beers this years’ batch will sell out quick.

Señorita (8% ABV), an award winning spiced porter, is subtly sweet with notes of chocolate. Brewed with cinnamon, Madagascar vanilla, and milk sugar, this Imperial Horchata Spiced Porter balances sweet milk with a bitterness that is perfect after a cold winter day.

“There is nothing better than watching the 14,000 ft peaks behind the brewery turn white with snow, knowing ski season is here. Senorita is such a great apres ski beer,” says Koch. “It has a really smooth mouthfeel, and the spicy notes coupled with the 8% ABV help to warm you up just enough.”

All three brews will be available for purchase at Elevation’s tasting room in Poncha Springs (115 Pahlone Pkwy) as well as at over 900 locations throughout Colorado. Limited quantities will also be available in Arizona.

About Elevation Beer Company
Elevation Beer Company is a craft brewery in the rural mountain town of Poncha Springs, Colorado. Founded on the principles of hard work, dedication, discipline and, of course, playing hard, Elevation believes quality beer is the result of living a quality lifestyle. Elevation brews beer for the outdoor enthusiast and hard-working man alike with a handful of easy-drinking classics like 8 Second Kolsch, First Cast IPA, and Little Mo’ Porter. Ever eager to elevate people’s perceptions of beer, Elevation also offers unique seasonals as well as specialty Belgian ales and barrel aged beers. At Elevation, we are more than just a beer company; we are a family, a community, and a collective of ordinary people doing extraordinary things.