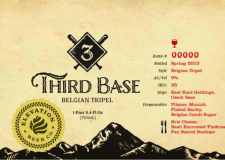 “We are super excited for these two fantastic Belgian style beers this spring,” says head brewer Christian Koch, “these two beers have been in the works for quite sometime and both are perfect fits for the warming weather of spring.”

They will both be released in 750ml cork and caged bottles as well as draft and should be available in mid to late March across Colorado.

“Third Base will come in at 9% ABV and was brewed using Belgian Candi Sugar and a traditional Belgian yeast strain, giving it great notes of pepper, clove, orange peel and spice,” Christian exclaims, “While False Summit, is a fantastic 11.1% ABV quadrupel and much more traditional then our Apis IV.  We aged it in Breck Distilling Bourbon Barrels to give it nice subtle notes of vanilla, oak, and bourbon.”

Elevation plans on releasing 3 more beers this year in both the Black and Double Black Series, for a total of 8 different seasonal specialty beers brewed in 2013 by Elevation.