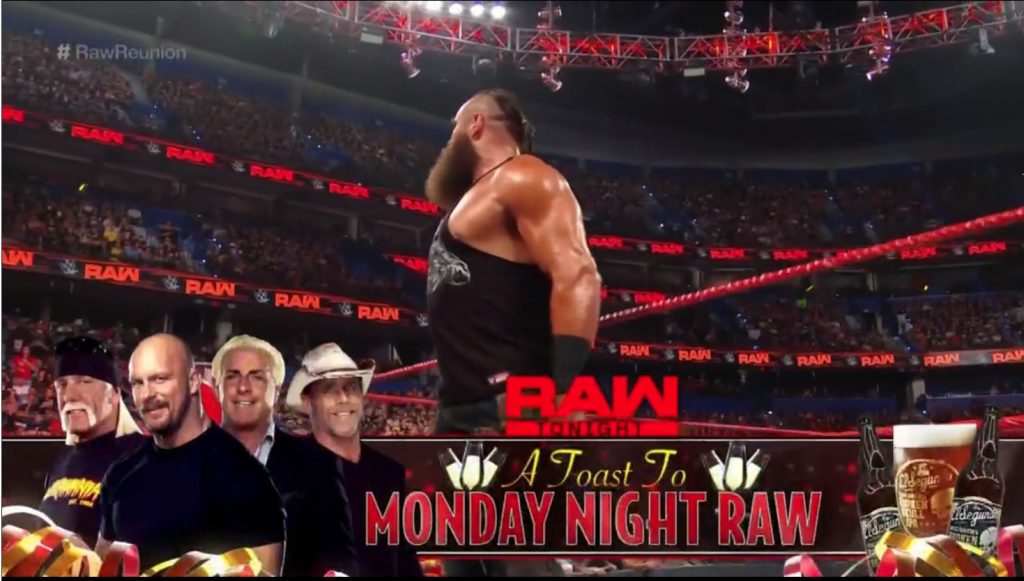 (El Segundo, CA) – This past Monday (July 22, 2019), WWE held a special edition of Monday Night RAW entitled RAW Reunion. This show featured wrestling legends from the past in addition to their current roster of WWE Superstars. Most notably, the show ended with a celebration featuring WWE Hall of Famer Stone Cold Steve Austin. For those watching closely, the final segment of the show was led in by a commercial break framing up “A Toast to Monday Night RAW”, showing El Segundo Brewing’s Steve Austin’s Broken Skull IPA in the right corner. The final segment began with all the participating legends coming out on stage to wave and take a bow, followed by Stone Cold Steve Austin marching to the ring and giving a toast and then an all out beer bash in the middle of the ring with numerous cans of Broken Skull IPA.

Naturally, this led to a huge spike in demand for this beer that hasn’t been seen this type of attention in a few years since it’s initial launch. El Segundo was so shocked by the reaction they received online this week that they had to address it.

“We’ve received hundreds, if not thousands, of inquires as to where you can find Broken Skull IPA. Currently, Broken Skull is only available in Southern CA, and sometimes Portland, OR, roughly in the vicinity of the Broken Skulls on the map (not pictured a US map). The good news is we are working on distribution plans to reach the masses. If you are a prospective distributor, please send us an email at [email protected]”

We reached out to Rob Croxall, owner/founder of El Segundo to get more details outside of that post.

“We were planning on switching to 16 oz. cans of Broken Skull IPA by the end of the year. We didn’t have much lead time for Steve’s toast on RAW Reunion, so we had to scramble to get him enough beer for the show. Obviously after this exposure, interest has gone crazy for this beer.”

El Segundo’s phone has been been off the hook since Tuesday morning, and with their Facebook teaser, we asked how they would get the beer farther than the West Coast and with whom.

“We just signed up with Craft Brewers Guild about a month ago. As you know, they have a pretty far reach, especially on the East Coast. While nothing is in concrete yet, the logical next move would be to put Broken Skull IPA into the CBG/Sheehan network back East. We will definitely be scaling up production on this beer as are orders have already increased since this wonderful exposure.”

For fun, we parted with Rob with one last question “when will be see Steve Austin’s Broken Skull Hazy IPA?” This is something we feel would do well financially, but would go against both Rob and Steve’s beer tastes. Rob replied saying “this is something I’d have to talk with Steve about, but believe me, this isn’t about the money.”