((Portland, OR) Earth) – This time around Ecliptic Brewing’s Cosmic Collaboration has reached beyond the beer world. Ecliptic and TeSóAria Winery have teamed up to create Blood of Jupiter. The beer is a Belgian style Tripel brewed by Ecliptic, then aged in Sangiovese wine barrels from TeSóAria. 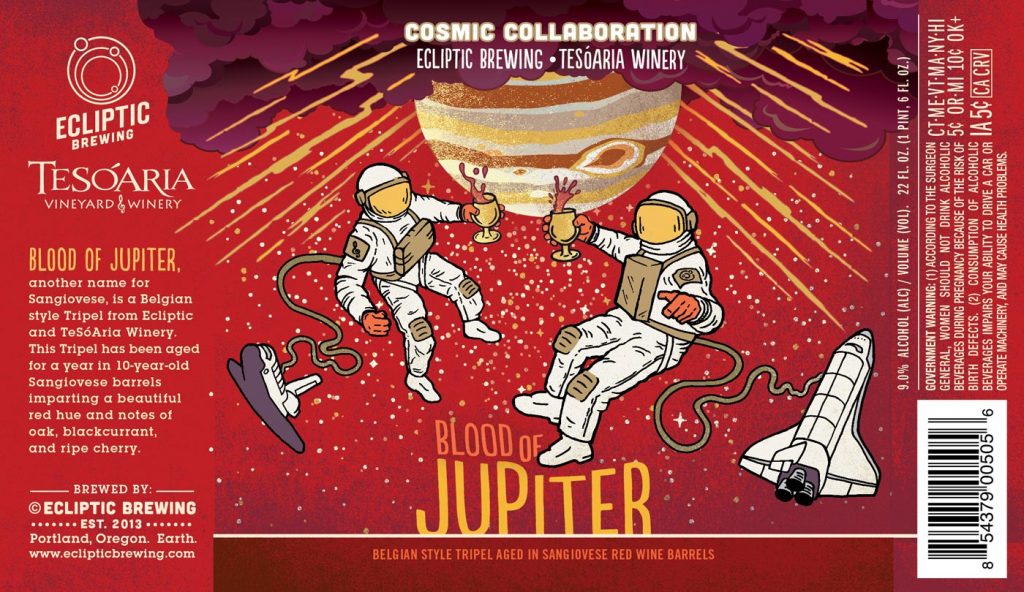 Blood of Jupiter will be celebrated at the Ecliptic + TeSóAria Harvest Lunation Dinner hosted at Ecliptic Brewing on October 28th at 6:00pm. The dinner will feature four courses paired with beer and wine from the collaborators, including Blood of Jupiter. To check on available reservations for this dinner, please email [email protected]

At 8:00pm on October 28th at Ecliptic Brewing, following the release dinner, guests will be able to try the beer on draft and also purchase 22oz bottles to-go. Limit two 22oz bottles per person.

About Blood of Jupiter
Blood of Jupiter, another name for Sangiovese, is a Belgian style Tripel from Ecliptic and TeSóAria Winery. This Tripel has been aged for a year in 10-year-old Sangiovese barrels imparting a beautiful red hue and notes of oak, blackcurrant, and ripe cherry. ABV 9%

About Ecliptic Brewing
Ecliptic Brewing is a venture from John Harris, an Oregon beer icon whose background is steeped in the state’s rich craft brewing history. The name Ecliptic unites Harris’ two passions: brewing and astronomy, and as such, the brewery celebrates the Earth’s yearly journey around the sun through both its beer and restaurant menus. Executive chef Michael Molitor rotates his seasonally inspired menu every six weeks in accordance with the old-world calendar. Harris’ signature beers include Spectra Hoppy Pilsner, Orbiter IPA, Carina Peach Sour Ale, and Capella Porter. For more information, visit: eclipticbrewing.com.

About TeSóAria Vineyard and Winery
TeSóAria is a pioneering boutique winery in Oregon’s Umpqua Valley known for its huge range of offbeat and award-winning wines, its tight-knit wine club family, and its unflinching commitment to social and environmental sustainability. Founder John Olson is constantly innovating with obscure varietals, environmental initiatives, and community events that bring diverse people together around a shared enjoyment of wine, food, and music.

The winery takes its name from the three powerful forces that inspire its operations: Terra honors the importance of soil and terroir; Sol represents the sun’s life-giving light and soul behind the wine, and Aria evokes the magic of music to unite and inspire.