Ecliptic Brewing Collabs with Cloudburst Brewing on Witbier with Lemon

(Portland, Oregon)- Portland, Oregon’s Ecliptic Brewing is teaming up with Cloudburst Brewing of Seattle, Washington to create a Belgian-style Witbier with Lemon. Shipping in late-August, this will be Ecliptic’s second Cosmic Collaboration of 2020. 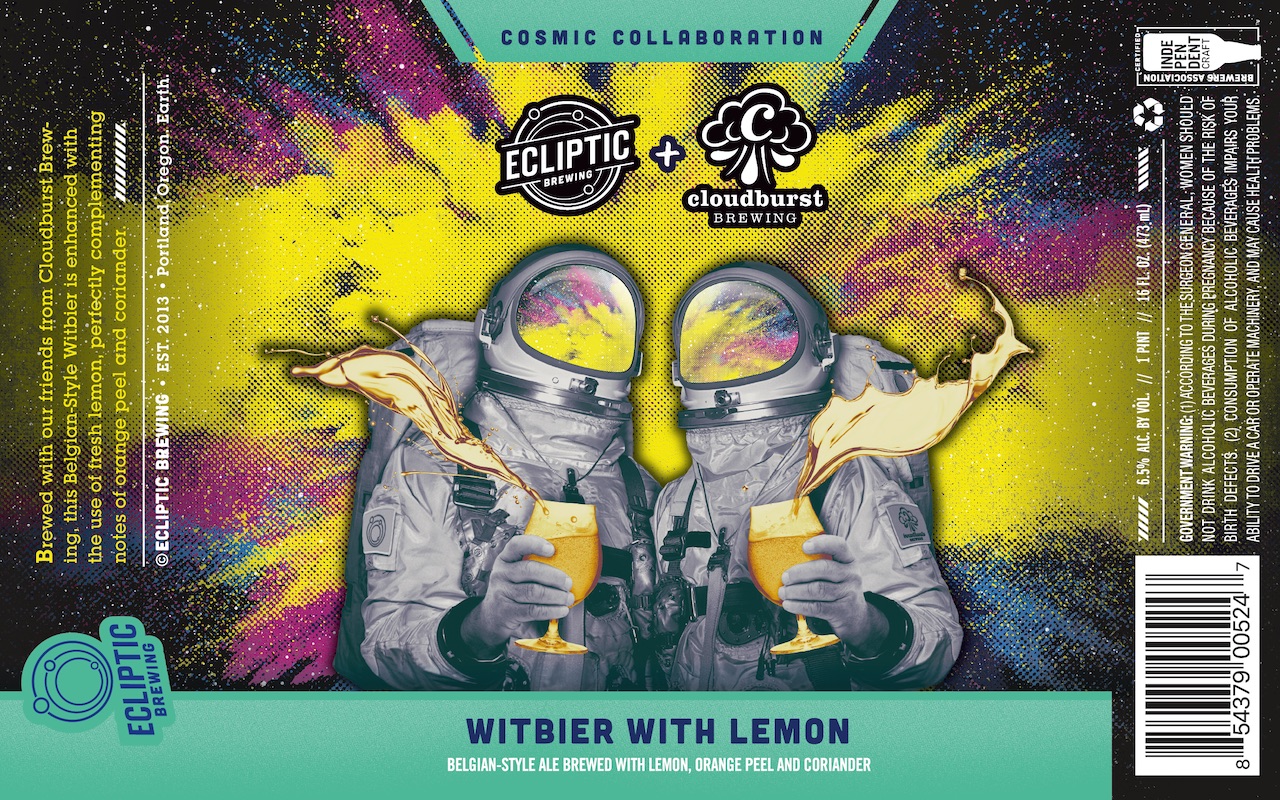 “I am super stoked to work on a beer with Steve, Cloudburst’s Head Brewer and Founder,” says Ecliptic’s Owner and Brewmaster, John Harris. “For the beer style, we started with the idea of a super drinkable summer beer- taking the classic Witbier and adding a refreshing hit of fresh lemon to up the drinkability.” This Cosmic Collaboration is brewed with real lemon, orange peel and coriander, which bring fresh, citrusy notes and create an excellent crushable beer for those hot days of late summer.

Ecliptic + Cloudburst Witbier with Lemon will be released in draft and 16-ounce cans throughout Ecliptic Brewing’s distribution network on August 26th. An official virtual release party will be held on Zoom on September 10th from 6-7PM, with both John Harris and Steve Luke in attendance. Participants will be able to pick up Party Packs of the tasting beers and Cosmic Collaboration at Ecliptic Brewing in Portland or Chuck’s (Central District) Hop Shop in Seattle. Visit Ecliptic’s website or Facebook event page for up to date details on this release.

About Ecliptic + Cloudburst Witbier with Lemon

Brewed with our friends at Cloudburst Brewing, this Belgian-Style Witbier is enhanced with the use of fresh lemon, perfectly complementing notes of orange peel and coriander.

Ecliptic Brewing is a venture from John Harris, an Oregon beer icon whose background is steeped in the state’s rich craft brewing history. The name Ecliptic unites Harris’ two passions: brewing and astronomy. As such, the brewery celebrates the Earth’s yearly journey around the sun through both its beer and restaurant menus. Harris’ signature beers include Starburst IPA, Phaser Hazy IPA, Carina Peach Sour Ale and Capella Porter. For more information, visit: eclipticbrewing.com.