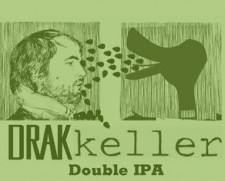 This week, Drakes Brewing Marketing Director Kelsey Williams took to the online air to sing the praises of collaboration beers, so when the guys from Mikkeller dropped us a line to ask about a brewday during SF Beer Week, we were definitely interested in what we could make together. It’s in that spirit that we’re happy to announce Drakkeller Double IPA – a DIPA made here at Drake’s in conjunction with gypsy brewers emeritus Mikkeller, based in Denmark.

Some of you may remember Mikkeller’s first foray into San Leandro, 2011’s Invasion IPA. If you missed out on that, you’re getting a second chance.

In typical gypsy fashion, Mikkeller’s Brewery Relations manger Thomas Schøn swung through the Bay during SF Beer Week and stopped by for a brew day.

Now, if you know Drake’s, you know we’re fully on board the West Coast hop train. And if you know Mikkeller, you know they’re all about pushing limits without losing sight of the goal of any beer- to be tasty, so we knew the beer should be a representation of the West Coast with some Mikkeller-esque experimentation thrown in.

After some discussion between Mikkel Borg Bjergsø, Thomas Schøn and our brewmaster John Gillooly, we ended up taking the best of both worlds and brew a double IPA dry-hopped exclusively with a “stupid amount of” a new experimental hop from Washington’s Yakima Valley, Azacca. It’s a new hop that’s already exciting brewers all up & down the West Coast, with heavy notes of citrus & tangerine, along with pine and apple. (Pictured: Drake’s brewer Michael Boals and Thomas Schøn on the brewdeck).

Drakkeller is an 8% Double IPA that both Mikkeller and Drake’s can call “our kind of beer.” The release will be Thursday, March 13th at, fittingly, Mikkeller Bar SF, just a few steps from San Francisco’s Powell St BART Station. Beyond that, expect to see this in the coming weeks on draft at a few select beer joints across the Bay Area, as well Drake’s Barrel House in San Leandro.