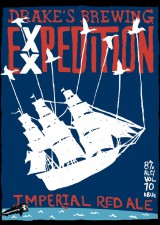 Wet Hopped Beers on the Way

Since “wet-hops” have such limits on the amount of time they can be stored, beers utilizing their interesting flavors only arrive at harvest time.

For our part, we teamed up with Hood Hops Ranch in Elk Grove, California, and growers Chris and Tom who are in their first year of harvesting his Cascade hops with plans to provide a local supply to hop-hungry California craft brewers. We bit first.

Chris invited Head Brewer John Gillooly and QA Manager Mike Spady up to check out the fields in early August, and upon seeing and smelling the Cascades growing up there, the guys knew these would make for one helluva wet-hopped beer. They arranged to send our guy Ricky in the Drake’s truck to pick up a load for our “Hella Fresh Pale Ale” and also for our “Harvest Hopped Aroma Coma” (coming soon).

Want to come try them out? Good news, my friends… Hella Fresh Pale Ale is currently on tap at Drake’s Barrel House with huge flavors and aromas of fresh melon, cucumber, and tropical fruits. Also, you can catch this beer out at a few of your favorite craft beer hubs throughout the state through the next month (releasing up north tomorrow with our rep Eben in Winters, CA at Main Street Cellars) and a later batch for Sierra Nevada’s Single, Fresh, Wet, and Wild festival on October 19th.

Drake’s Fall Season Imperial Red Ale, Exxpedition is returning again in September to take you on another trip.

“Exxpedition, a full-bodied Imperial Red, pours ruby red from crystal malts and roasted barley that give the beer rich caramel tones and a hint of roastinees. Additions of citrusy, resinous West-Coast hops, and an abundant dry-hop deliver intense flavors and aromas of grapefruit and pine with a clean bitter finish. Are you ready? The Journey awaits.”

The beer will release on Saturday, September 28th at 12pm at Drake’s Barrel House in bottles and on draft, and will be available throughout California for your fall imbibing needs. Get here to sip on our balanced, satisfying taste of the season, Drake’s style.

There’s not a lot of debate that our own SF Beer Week is pretty much the grandaddy of them all, but there’s a town about five hours south that’s apparently putting on a good show. September 19-29, the Southland is going to show the rest of the country what they got going on, beer-wise.  In addition to our brew with Beachwood, our LA rep Chris, Head Brewer John Gillooly, Marketing Director Kelsey, and a couple more folks from Drake’s crew will be bouncing around the basin all week.  It’ll basically be like Tom Petty’s Free Fallin’.  Here’s what we have on the docket for now:

Keep an eye out for more events on our LA Beer Week events page.