(Hood River, OR) – Double Mountain Brewery & Taproom is releasing the newest addition to our seasonal lineup. This is a Juicy IPA, Double Mountain style. Juicy’s don’t have to be Hazy, but Hazy’s can be Juicy. So, we set out to make a non-hazy, incredibly aromatic, juicy IPA, and (*gasp) lower on the alcohol. Available in refillable 500ML bottles and draft at our Hood River Taproom and SE Portland Taproom in the Woodstock neighborhood and throughout the Northwest. 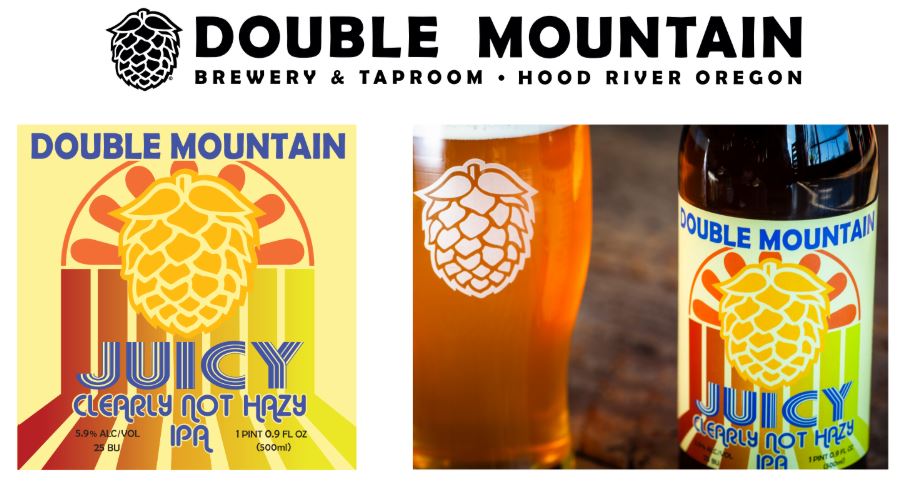 JUICY, CLEARLY NOT HAZY IPA 5.9% ABV 25 BU
Not all Juicy IPA’s need to be hazy. Pour in to a dense tropical rainforest dripping with the sticky, delicious mango, kind herb, and ripe orange. The taste of the tropics continues in the rounded body, leaving only a whisper of bitterness. Juicy? Clearly.

“Our beers don’t fit in a neat box. We don’t brew to style. We don’t brew for awards. We love a beer where the hops cover your wagon and drive your horse. This is our Juicy. And clearly, it’s not hazy.” Matt Swihart, Owner and Brewmaster

About Double Mountain Brewery and Taproom:
Double Mountain Brewery and Taproom was established in 2007 in the heart of downtown Hood River, OR. Founder, Matt Swihart, opened the brewery with a clear mission: make great beer for craft beer fans. The unique location of Double Mountain provides the use of pure and clean glacial water for beers and ciders, while also take advantage of regionally grown hops. Reusable bottles allow customers to partake in a softer environmental footprint, affirming they are part of a sustainable future. Double Mountain may be found on tap and in bottles throughout the Pacific Northwest and British Columbia.