(Milton, DE) – Is it an IPA disguised as a Kölsch or a Kölsch disguised as an IPA? Well you’ll be able to weigh in on this mystery in early January because Dogfish Head Craft Brewery will uncloak its newest Double IPA, The Perfect Disguise (8% ABV, available in 12oz/6pk bottles.) On the surface, this golden beer looks like a straightforward Kolsch with a crisp Kolsch yeast and traditional German malts and hops – but things aren’t always what they seem. Your first sip of this beer lets you know it’s something different. The luscious body and creamy mouthfeel is a result of a unique German chit malt. Hiding deeper behind that German disguise is the double-dry hopping of an American Double IPA, with nearly 4lbs of German and American hops per barrel, bringing tropical flavors of citrus, tangerine, mango, gooseberries and peach. 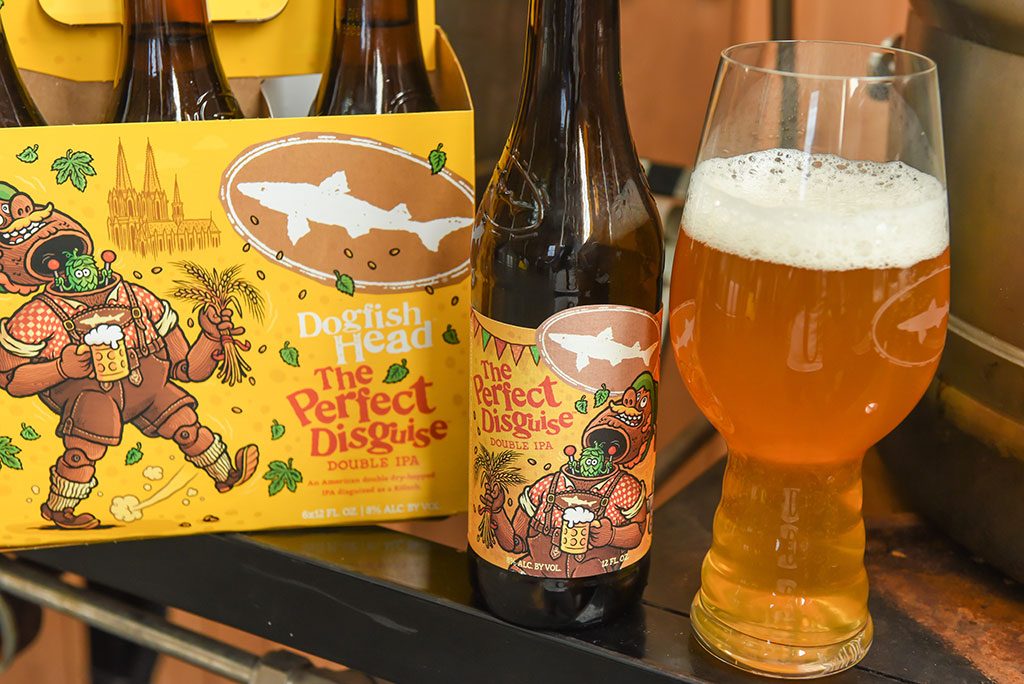 “Our raison d’être at Dogfish is to innovate and not follow, so on this exploration of goodness in the world of IPAs we’ve chosen to chase the creative white space in the sphere of beer recipes, concepts and ideas and I think we nailed it with our adventurous take on a Double IPA with The Perfect Disguise,” said Sam Calagione, CEO and founder of Dogfish Head Craft Brewery. “We punched up the creativity by layering in two different yeasts which bring forth the most delicious flavor profiles from both a Kolsch and an IPA – a delicious experiment.”

The artwork for The Perfect Disguise was brought to life and designed by highly acclaimed artist, Michael Hacker, who partnered with Dogfish Head for the 2019 Off-Centered Art Series. The name “The Perfect Disguise” was the inspiration for the illustration design as it’s a play on words with whether or not the beer is actually a Kolsch or an American IPA. Hacker artfully portrayed that mystery by creating a German waiter dressed in lederhosen as a nod to the Kolsch style and added a hop popping out from his neck and controlling the robot, which represents the American IPA. The bright yellow and orange packaging is a nod to the golden color of the beer.

Raison D‘Extra will also make a comeback this year and heads to taps and shelves in early January in 12oz/4pk bottles. This immodest brew is made with an obscene amount of malt, brown sugar and raisins, and takes Belgian-style browns to new heights. Dark amber in color, Raison D’Extra (15-18% ABV) has a clovey and slightly herbal finish with notes of sherry, nuts and sweet dried pit fruits. Calagione describes it as, “our Raison D’Etre, with a little extra. This puppy’s only getting better with age, so sip on one with a loved one now and stash the rest in your beer cellar for later.”

Dogfish Head:
Dogfish Head has proudly been focused on brewing beers with culinary ingredients outside the Reinheitsgebot since the day it opened as the smallest American craft brewery 23 years ago. Dogfish Head has grown into a top-20 craft brewery and has won numerous awards throughout the years including Wine Enthusiast’s 2015 Brewery of the Year and the James Beard Foundation Award for 2017 Outstanding Wine, Spirits, or Beer Professional. It is a 350+ coworker company based in Delaware with Dogfish Head Brewings & Eats, an off-centered brewpub and distillery, Chesapeake & Maine, a geographically enamored seafood restaurant, Dogfish Inn, a beer-themed inn on the harbor and Dogfish Head Craft Brewery, a production brewery and distillery featuring a tasting room and food truck. Dogfish Head supports the Independent Craft Brewing Seal, the definitive icon for American craft breweries to identify themselves to be independently-owned and carries the torch of transparency, brewing innovation and the freedom of choice originally forged by brewing community pioneers. Dogfish Head currently sells beer in 44 states and Washington D.C.