(Milton, DE) – Arriving just in time to make your “jingle bells rock,” Dogfish Head is bringing “joy to the world” with the release of the IPAs for the Holidays variety 12-pack.  Available in early November, the holiday pack contains 4 varieties of IPA goodness in one special box.  Featuring 2 exclusives – Sixty One and Viniferous IPA – along with a duo of fan-favorite IPAs – 60 Minute IPA and 90 Minute Imperial IPA – the holiday pack has all of your festive beer needs covered, including an homage to “reds and whites” for the vino lovers in the bunch.  The “white” beer-wine hybrid, Viniferous IPA, is fermented with Riesling & Viognier grape must and hopped with Hallertau Blanc, Huell Melon and El Dorado to match the dry, fruity complexity of a Riesling with the hoppiness of an IPA.Sixty One, the “red” beer-wine mashup, is a marriage of two Dogfish Head innovations – beer-wine hybrids featuring Syrah grape must and continually hopped IPAs. A great gift for holiday parties, the pack also features a special gift tag that can be personalized. 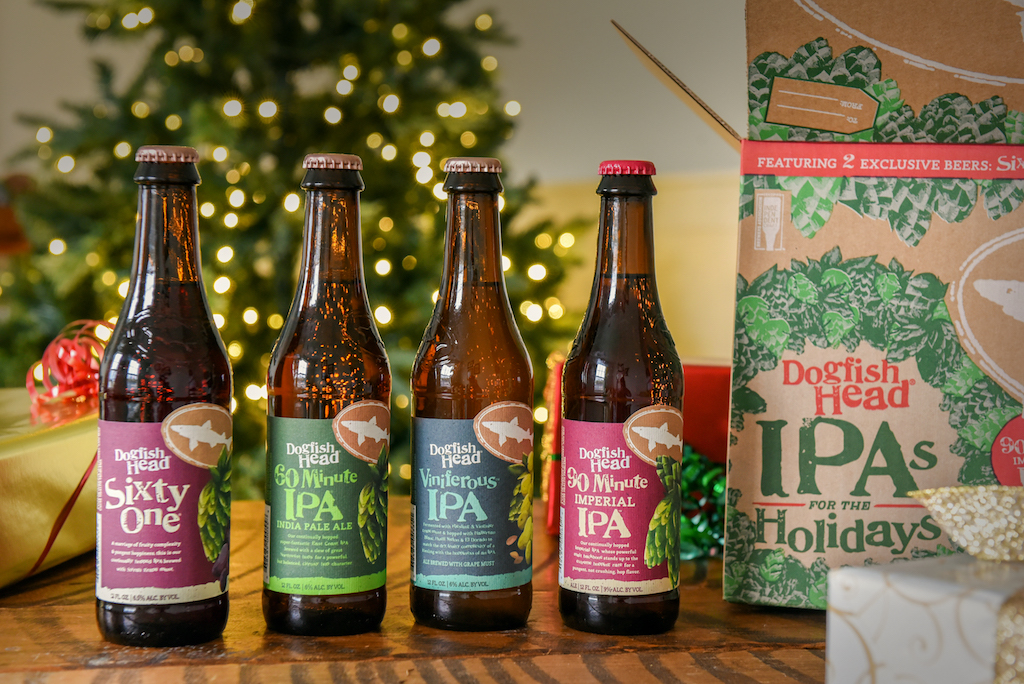 The IPAs for the Holidays 12pk includes:

Fermented with Riesling and Viognier grape must and hopped with Hallertau Blanc, Huell Melon and El Dorado to match the dry, fruity complexity of a Riesling with the hoppiness of an IPA.

Sixty One – 12-pack EXCLUSIVE (Where applicable by law.)

A continually hopped super-fantastic East Coast IPA brewed with a slew of great Northwest hops for a powerful, but balanced, citrusy hop character.

A continually hopped Imperial IPA whose powerful malt backbone stands up to the extreme hopping rate for a pungent, not crushing flavor.

“We’ve been experimenting with continual hopping and inventive beer-wine hybrid concoctions since we first opened our doors twenty-three years ago at our brewpub in Rehoboth,” said Sam Calagione, founder and CEO ofDogfish Head Craft Brewery. “From angling a vibrating football game over a 5-barrel kettle with a bucket of pelletized hops hanging over it – which brought us 90 Minute Imperial IPA and paved the way for 60 Minute and120 Minute IPA – to blending grape juice and must in the brewing process with beers like Midas Touch, Noble Rotand Red & White; we take great pride in pushing the boundaries of experimentation in brewing at Dogfish and are excited to move ahead into 2019 and beyond as we continue to stoke the flames of creativity in craft beer.”

For more information about Dogfish Head Craft Brewery and the IPAs for the Holidays visit dogfish.com