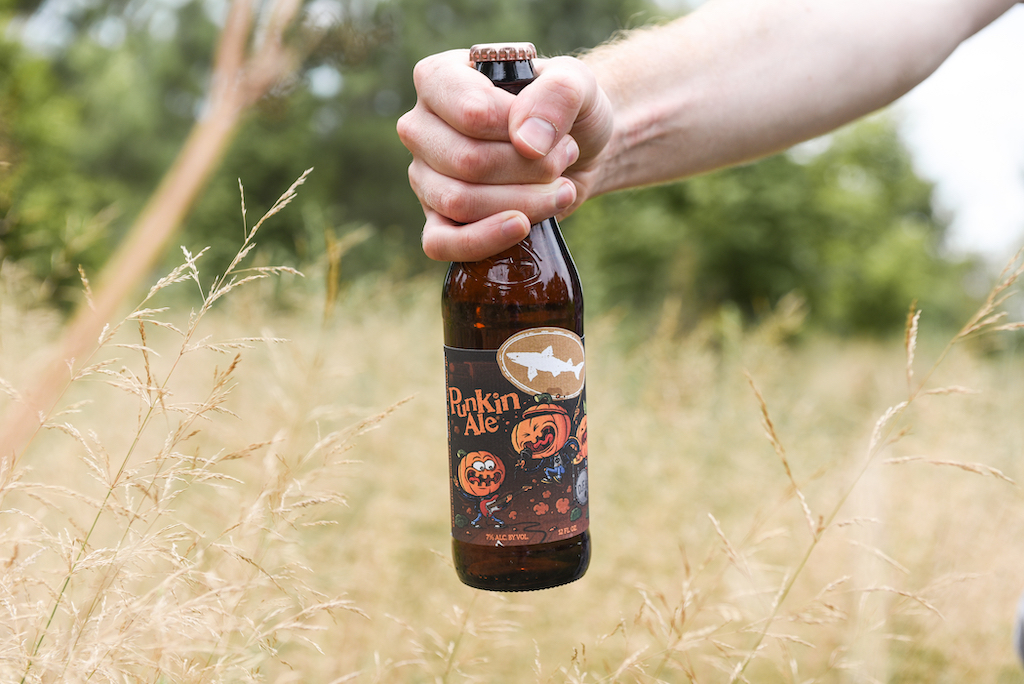 “Punkin Ale made its first commercial appearance in 1995, but its story begins back in 1994 at the World Championship of Punkin Chunkin, a legendary fall event that brings folks from around the world to the Delmarva area to see who could hurl a pumpkin the furthest,” said Sam Calagione, founder of Dogfish Head. “It was there that I entered my first-ever batch of pumpkin beer into a baking contest. It ended up winning first place – beating out a boatload of homemade pumpkin cookies, pies and cakes – and Punkin Ale as we know it was born. I even named the beer after the festival’s Punkin Chunkin competition.”

Since its debut, the recipe for Punkin Ale has remained the same, but the beer’s artwork has seen many variations. This year’s label lends a spirited nod to Dogfish Head’s longtime love of music, especially punk rock music. Hacker’s design features a melodic trio of cartoon pumpkin characters ‘rockin’ it out’ on stage in front of a live audience. The band includes a singer, a guitarist and a drummer, all of which are fully engrossed in their hard-hitting tunes. The small details in Hacker’s work – like pumpkin people throwing up the ‘rock on’ sign and crowd surfing through a sea of fans – amplify the scene’s allure, drawing beer drinkers deeper into the imaginary concert until sounds of shrill guitar runs and booming bass drums become audible.

“As a beer geek with a music problem, I couldn’t be more excited about this year’s Punkin Ale packaging,” said Calagione. “It captures the essence and energy of a punk rock concert in an interesting and lighthearted way. Makes me want to grab a bottle of Punkin and take my turn up on the stage!”

Punkin Ale is available on shelves now in 6pk/12oz bottles. For more information about Dogfish Head and its lineup of off-centered ales, or to find Punkin Ale near you, visit www.dogfish.com.

Dogfish Head has proudly been focused on brewing beers with culinary ingredients outside the Reinheitsgebot since the day it opened as the smallest American craft brewery 24 years ago. Dogfish Head has grown into a top-20 craft brewery and has won numerous awards throughout the years including Wine Enthusiast’s 2015 Brewery of the Year and the James Beard Foundation Award for 2017 Outstanding Wine, Spirits, or Beer Professional. It is a 350+ coworker company based in Delaware with Dogfish Head Brewings & Eats, an off-centered brewpub and distillery,Chesapeake & Maine, a geographically enamored seafood restaurant, Dogfish Inn, a beer-themed inn on the harbor and Dogfish Head Craft Brewery a production brewery and distillery featuring The Tasting Room & Kitchen. Dogfish Head supports the Independent Craft Brewing Seal, the definitive icon for American craft breweries to identify themselves to be independently-owned and carries the torch of transparency, brewing innovation and the freedom of choice originally forged by brewing community pioneers. Dogfish Head currently sells beer in 45 states and Washington D.C. For more information, visit www.dogfish.com, Facebook: @dogfishheadbeer, Twitter: @dogfishbeer, and Instagram: dogfishhead.