(Milton, DE) – Dogfish Head Craft Brewery is happy to announce its collection of off-centered beers is on its way to the great state of Arkansas. Locals can look for Dogfish on shelves and taps beginning in late March. The Delaware-based craft brewery partnered with Arkansas Craft Distributors and O’Connor Distributing to bring Dogfish Head’s full portfolio of flavorful ales to residents throughout the state of Arkansas, taking the company’s total market distribution to 41 states and Washington, D.C. 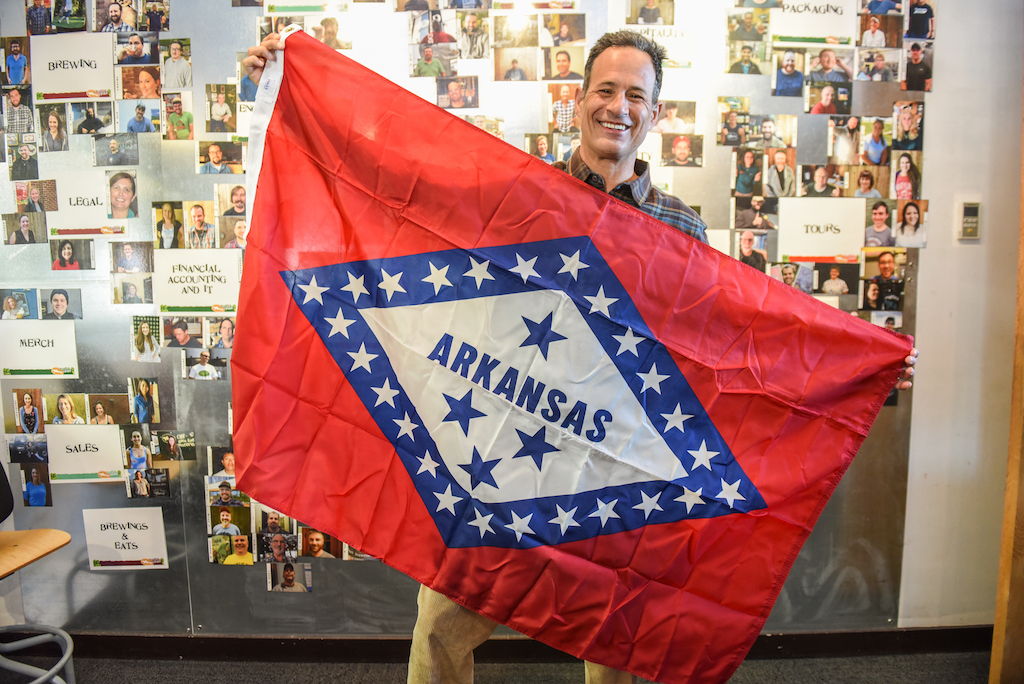 Committed to consistently delivering goodness to its fans, Dogfish Head strategized and laid the groundwork for a forward-looking growth plan for Arkansas and beyond. The brewery enjoyed explosive double digit growth in 2017 and tripled the size of its sales team to further support its existing distribution partners across the nation. Along with its diverse and innovative portfolio of craft beers, Dogfish redesigned its artwork, revamped its packaging, introduced cans to its mix, announced its 2018 artist collaboration with Marq Spusta for the Off-Centered Art Series, and unveiled Dragons & YumYums, a beer created and brewed in partnership with the legendary American indie rock group, The Flaming Lips.

“We’re excited to ship our innovative beers to Dogfish fans in Arkansas and to begin a great and long-lasting relationship with the beer drinkers, retailers, and distributor partners in the state,” said Sam Calagione, founder and CEO of Dogfish Head Craft Brewery. “We have our canning and bottling lines pumping out a ton of beer and enough brewing capacity to ensure we can keep retailers well stocked with our well-differentiated family of beers for years to come.”

For those craving a bite with their Dogfish Head beers, the brewery suggests pairing these off-centered pints with some well-known Arkansas dishes.

Try a Namaste White with your Fried Pickles. The lemongrass and peppercorn notes in the beer present a nice balance to the salty and tart flavors of this popular appetizer.

Next time you’re having some Cheese Dip, grab a 60 Minute IPA. Its assertive piney and citrusy hop flavors pair well with the gooey, rich cheesiness of this sometimes spicy snack.

Have a SeaQuench Ale with your Fried Catfish. This black lime session sour is the perfect complement to any seafood, and fried catfish is no exception. Its light body counters the hearty nature of this dish and its lightly salty, tart finish brings all the flavors of this meal together for a delicious bite!

Dogfish Head has proudly been focused on brewing beers with culinary ingredients outside the Reinheitsgebot since the day it opened as the smallest American craft brewery 23 years ago. Dogfish Head has grown into a top-20 craft brewery and has won numerous awards throughout the years including Wine Enthusiast’s 2015 Brewery of the Year and the James Beard Foundation Award for 2017 Outstanding Wine, Spirits, or Beer Professional. It is a 300+ coworker company based in Delaware with Dogfish Head Brewings & Eats, an off-centered brewpub and distillery, Chesapeake & Maine, a geographically enamored seafood restaurant, Dogfish Inn, a beer-themed inn on the harbor and Dogfish Head Craft Brewery, a production brewery and distillery featuring a tasting room and food truck. Dogfish Head supports the Independent Craft Brewing Seal, the definitive icon for American craft breweries to identify themselves to be independently-owned and carries the torch of transparency, brewing innovation and the freedom of choice originally forged by brewing community pioneers. Dogfish Head currently sells beer in 41 states and Washington D.C. and will expand into additional states in 2018. For more information, visit www.dogfish.com, Facebook: @dogfishheadbeer, Twitter: @dogfishbeer, and Instagram: dogfishhead.