(Milton, DE)  – Dogfish Head is truckin’ into 2019 as it reunites with the iconic Grateful Dead band to bring back a much-anticipated collaboration beer, American Beauty. This synergetic union brings fans a pale ale that shares a name with the popular 1970 Grateful Dead album, American Beauty, featuring hits like “Friend of the Devil,” ”Sugar Magnolia,” and “Truckin.’” A band with an immensely loyal, multi-generational fan base, the Grateful Dead are widely known for blending music genres like psychedelia, blues, folk, country, rock ‘n’ roll and jazz to create their incredibly unique rock sound. 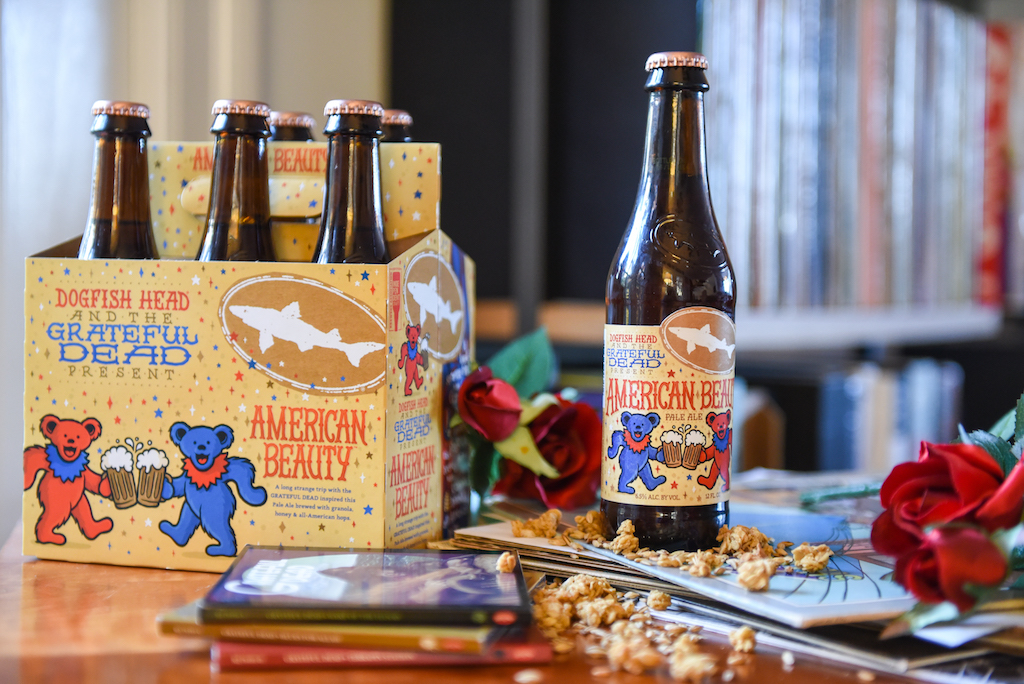 Available in 6pk/12oz bottles and clocking in at 6.5% ABV to commemorate the year the Grateful Dead was formed (1965), American Beauty is brewed with granola and succulent wildflower honey which adds toasty, sweet notes to this hoppy ale. When Dogfish Head first collaborated with the band in 2013, they jointly reached out to their fan base with a call out for ingredient suggestions to incorporate into the recipe of the beer. Loyal dead heads and off-centered ale enthusiasts submitted more than 1500 ingredient suggestions, and after careful thought (and chuckles at some of the entries,) it was granola for the win. The beer was an instant favorite and Dogfish Head is bringing it back for a limited time in December 2018, and will be available through 2019.

“After more than 50 years of performing in front of fans all over the world, folks remain fiercely loyal to the Grateful Dead due to the organically imaginative, creative and accessible culture they nurture across all artistic platforms,” said Sam Calagione, CEO and founder of Dogfish Head. “We, at Dogfish, are inspired by their music, along with their unprecedented ability to bridge long-lasting, meaningful connections with fans for decades on end. We’re thrilled to collaborate with the Dead for a second iteration of American Beauty and hope fans of free-spirited music and independent beer will join in welcoming back this classic pale ale.” In addition to the beer release, Dogfish Head will be working with the official Grateful Dead archivist, David Lemieux, who curates and produces a series of rare and highly sought-after live Grateful Dead shows, known as “Dave’s Picks.” Dogfish Head will partner with Lemieux on a number of projects, including an immersive storytelling experience at their Rehoboth and Milton properties in early February. Good tunes and great beer are deeply rooted in the DNA of Dogfish Head as the brewery has composed several musically inspired beers with notable artists like The Flaming Lips, Miles Davis, Deltron 3030, Pearl Jam and Guided by Voices.

SuperEIGHT, a vibrant red sessionable Super Gose, will debut this year in 6pk/12oz cans.  This unique beer is made with eight heroic superfoods including prickly pear, mango, boysenberry, blackberry, raspberry, elderberry and kiwi juices, with a touch of toasted quinoa and an ample addition of red Hawaiian sea salt. With delicious flavors of berries and watermelon, this ale has a slightly tart and pleasantly refreshing finish.

A longtime champion of all things collaborative and artful, Dogfish Head is celebrating its 2019 Off-Centered Art Series, for which they have partnered with highly acclaimed artist, Michael Hacker, to create custom pieces of art for beers that brings their unique stories to life through visuals. Art Series beers include The Perfect Disguise – an American double dry-hopped IPA disguised as a Kölsch, Dragons & YumYums – a lip smackingly tropical pale ale, Punkin Ale – a full bodied brown ale brewed with real pumpkin, and 75 Minute IPA – a continually hopped IPA brewed with maple syrup from Calagione’s family farm in Western Massachusetts.

With a boatload of exciting new releases, Dogfish is also proud to bring back favorites like Raison D’Extra – a Belgian-style brown made with an obscene amount of malt, brown sugar and raisins, World Wide Stout – a dark, rich, roasty and complex ale, and 120 Minute IPA – the Holy Grail for hopheads. The Off-Center Your Summer pack, a sessionable variety pack loaded with cans, and IPAs for the Holidays, a delicious India Pale Ale gift pack, will both make their return in 2019. To find and enjoy Dogfish Head craft beer or to view a full 2019 calendar please visit dogfish.com.

Dogfish Head has proudly been focused on brewing beers with culinary ingredients outside the Reinheitsgebot since the day it opened as the smallest American craft brewery 23 years ago. Dogfish Head has grown into a top-20 craft brewery and has won numerous awards throughout the years including Wine Enthusiast’s 2015 Brewery of the Year and the James Beard Foundation Award for 2017 Outstanding Wine, Spirits, or Beer Professional. It is a 350+ coworker company based in Delaware with Dogfish Head Brewings & Eats, an off-centered brewpub and distillery, Chesapeake & Maine, a geographically enamored seafood restaurant, Dogfish Inn, a beer-themed inn on the harbor and Dogfish Head Craft Brewery, a production brewery and distillery featuring a tasting room and food truck.  Dogfish Head supports the Independent Craft Brewing Seal, the definitive icon for American craft breweries to identify themselves to be independently-owned and carries the torch of transparency, brewing innovation and the freedom of choice originally forged by brewing community pioneers. Dogfish Head currently sells beer in 44 states and Washington D.C. For more information, visit www.dogfish.com, Facebook: @dogfishheadbeer, Twitter: @dogfishbeer, and Instagram: dogfishhead.

Grateful Dead is a social and musical phenomenon that grew into a genuine American treasure. In 1965, an entire generation was linked together by common ideals, gathering by the hundreds and thousands. This movement created a seamless connection between the band and its fans. As the band toured, Dead Heads would follow. Not because it was a part of popular culture, but because it is a true counterculture that exists to this very day-one that earnestly believes in the value of its beliefs. By 1995, Grateful Dead had attracted the most concert goers in the history of the music business, and today remain one of the all-time leaders in concert ticket sales. Eventually, the caravan evolved into a community with various artists, craftsmen and entrepreneurs supplying a growing demand for merchandise that connected them to the music. Today, the connection is as strong as ever.