(Milton, DE) – After an overwhelmingly positive reaction from fans, Dogfish Head Craft Brewery’s Liquid Truth Serum is back by popular demand as a year-round brand and is making the transition from 6pk/12oz bottles to 4pk/16oz cans. Slated to hit shelves nationwide late June, this IPA debunks the myth that IBUs (hop bitterness) can only be achieved by adding hops during the boil, as all of its hops are added post-boil. During the whirlpool, whole leaf, liquefied, pelletized and powdered hops are added to create a beer that is truthfully hoppy without being deceptively bitter. Clocking in at 7% ABV and 65 IBUs, the unfiltered Liquid Truth Serum is immensely and approachably hoppy. Golden-orange in color, this IPA fills the palate with citrusy notes of mandarin orange, tangerine, tropical mango and hints of juicy stone fruits. 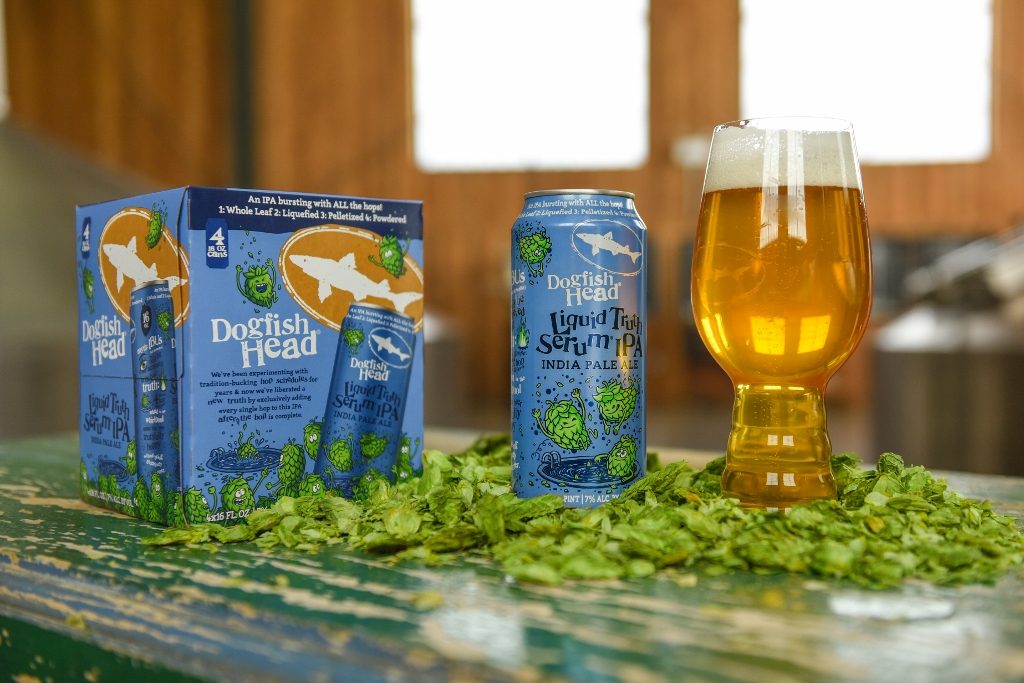 “After so much love from our fans, the truth was clear – Liquid Truth Serum needed to come back, and this time, as a year-round offering,” said Sam Calagione, CEO and founder of Dogfish Head Craft Brewery. “Introducing it in cans makes it more convenient than ever, increasing its portability and overall awesomeness, and we couldn’t be more excited about the evolution of this brew.”

Later in June, Dogfish Head will also release Fruit-Full Fort – a twist on the beloved Fort. Brewed with raspberries, blackberries, boysenberries and elderberries, this Belgian ale has a depth and complexity reminiscent of a jammy red wine. To provide a firmer backbone and give balance to the beer’s tart berry blend, the malt bill was punched up with Munich malts. Clocking in at 15-18% ABV, Fruit-Full Fort is opaque with a dark maroon color, has fragrant notes of velvety cherry and berry sweetness, and the smooth lingering sweetness of raspberry and blackberry.

“At Dogfish, we create food-centric beers that allow us to examine the entire culinary landscape for ingredient choices and flavors to enhance the aroma and taste of the beer,” said Calagione. “With Fruit-Full Fort, we went overboard in adding ridiculous amounts of flavorful berries which makes this beer a perfect complement for desserts like a decadent chocolatey cake or a rich velvety torte. Like World Wide Stout, Old School, 120 Minute IPA, and beers that typically clock in at over 14-15%, Fruit-Full Fort is a perfect candidate for cellaring as the flavor profiles really tend to hit their stride after aging it for a couple of years.”

To celebrate Fruit-Full Fort, Dogfish Head will host a release party at the Dogfish Head Craft Brewery in Milton on Friday, June 22 from 11 a.m. to 7 p.m. Throughout the day, 250 limited-edition posters of the beer’s artwork will be given away to guests.

About Dogfish Head: Dogfish Head has proudly been focused on brewing beers with culinary ingredients outside the Reinheitsgebot since the day it opened as the smallest American craft brewery 23 years ago. Dogfish Head has grown into a top-20 craft brewery and has won numerous awards throughout the years including Wine Enthusiast’s 2015 Brewery of the Year and the James Beard Foundation Award for 2017 Outstanding Wine, Spirits, or Beer Professional. It is a 300+ coworker company based in Delaware with Dogfish Head Brewings & Eats, an off-centered brewpub and distillery, Chesapeake & Maine, a geographically enamored seafood restaurant, Dogfish Inn, a beer-themed inn on the harbor and Dogfish Head Craft Brewery, a production brewery and distillery featuring a tasting room and food truck. Dogfish Head supports the Independent Craft Brewing Seal, the definitive icon for American craft breweries to identify themselves to be independently-owned and carries the torch of transparency, brewing innovation and the freedom of choice originally forged by brewing community pioneers. Dogfish Head currently sells beer in 42 states and Washington D.C. and will expand into additional states in 2018.