(Milton, DE)  – Fall-time fun is just around the corner, meaning Dogfish Head’s fall-flavored brews – the beloved Punkin Ale and all-new Costumes & Karaoke – are making their way to shelves and taps near YOU! Making its nationwide debut in mid-September, Costumes & Karaoke (8.0% ABV) is a complex, golden tea-inspired imperial oat cream ale built upon a sophisticated blend of spices, including vanilla beans, ginger, cinnamon and turmeric. The resulting vibrant gold liquid is filled with aromas of ginger, cardamom, anise and vanilla, and sweet and spicy flavors of ginger, citrus and cardamom. 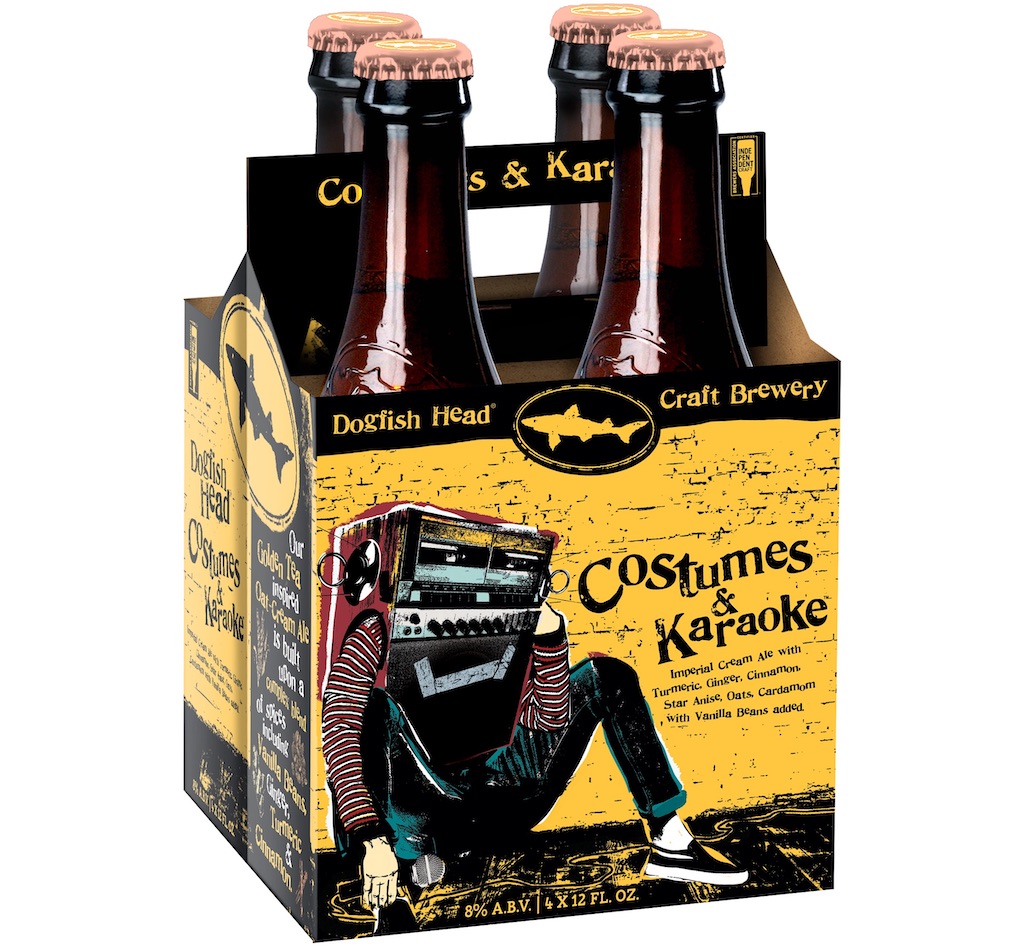 “With Costumes & Karaoke, I wanted to bring to life – in beer form – the intricate flavors and esters found in one of my favorite drinks, a golden milk latte,” said Calagione. “Golden milk, or ‘Haldi Ka Doodh,’ is a turmeric-infused milk with origins dating back centuries. Through Costumes & Karaoke, I believe, we were able to successfully pay homage to this ancient libation and create a delicious beer that offers a new and exciting experience in every sip.”

Now available from coast to coast, Dogfish Head’s fan-favorite Punkin Ale (7.0% ABV) is back with a new, steampunk-centric look by Dan Stiles, the brewery’s collaborating artist for this year’s Off-Centered Art Series. A full-bodied brown ale brewed with real pumpkin, brown sugar, allspice, nutmeg and cinnamon, Punkin Ale made its first appearance in 1995 and has been released every year since. Copper in color, this medium-bodied liquid masterpiece is known for its smooth hints of pumpkin, brown sugar and spice.

“While I’m beyond excited to share Costumes & Karaoke with Dogfish Head fans both near and far, nothing says, ‘It’s officially fall,’ like a Punkin Ale,” said Sam Calagione, Dogfish Head founder and brewer. “This time of year, I always look forward to sitting with my wife, Mariah, around the Cowboy Cauldron at our canal-front hotel, the Dogfish Inn, enjoying some off-centered ales and reminiscing about the memories we’ve made throughout the years. Typically, we would each raise a Punkin Ale, but this year, we’ll have to bring Costumes & Karaoke into the mix!”

To learn more about Dogfish Head, or to find Punkin Ale or Costumes & Karaoke near you, visit www.dogfish.com.

Dogfish Head has proudly been focused on brewing beers with culinary ingredients outside the Reinheitsgebot since the day it opened as the smallest American craft brewery nearly 25 years ago. Dogfish Head has grown into a top-20 craft brewery and has won numerous awards throughout the years, including Wine Enthusiast’s 2015 Brewery of the Year and the James Beard Foundation Award for 2017 Outstanding Wine, Spirits, or Beer Professional. It is a 350+ co-worker brand based in Delaware, with Dogfish Head Brewings & Eats, an off-centered brewpub, Chesapeake & Maine, a geographically-enamored seafood restaurant, Dogfish Inn, a beer-themed inn on the harbor, and Dogfish Head Craft Brewery, a production brewery and distillery featuring the Tasting Room & Kitchen and Dogfish Head Distilling Co. Dogfish Head supports the Independent Craft Brewing Seal, the definitive icon for American craft breweries to identify themselves to be independently-owned, and carries the torch of transparency, brewing innovation and the freedom of choice originally forged by brewing community pioneers. Dogfish Head currently sells beer in all 50 states and Washington D.C. For more information, visit www.dogfish.com, Facebook: @dogfishheadbeer, Twitter: @dogfishbeer, and Instagram: @dogfishhead.